Russia And Ukraine Are At War

January 23, 2015
WASHINGTON, DC -- Moscow won’t admit it, but Russia is at war with Ukraine. It’s hard to draw any other conclusion from reports that Russian regular forces have moved into eastern Ukraine and are attacking Ukrainian military units amid a flare-up of violence this past week. 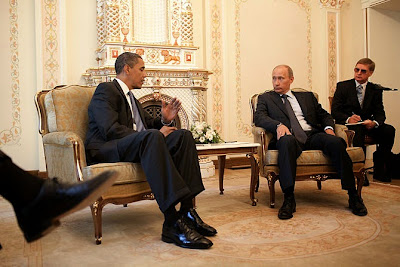 New reports indicate that eight civilians were killed after a mortar shell fell in Donetsk, mere hours after the foreign ministers of Russia, Ukraine, Germany and France agreed on a “buffer zone” to cut down on the violence.

All the while, Russia continues to insist that separatist forces in Donetsk and Luhansk are independent of Russian control and military support.

But Ukrainian Prime Minister Arseniy Yatsenyuk has made clear how ludicrous this assertion is: “Tanks, GRAD multiple rocket systems, BUK and SMERCH systems, radio electronic intelligence systems are not sold at local Donetsk street markets. Only the Russian army and Defense Ministry have them.”

So far, Russian assistance to the separatists has mostly taken the form of advanced military equipment and paramilitary forces to advise and assist local rebels.

But now, Russia is reported to have moved two battalions of regular troops across the border, with three more battalions of motorized infantry and an artillery division on the way.

The BUK system that Yatsenyuk mentions is the missile platform that shot down Malaysian Airlines flight 17 over Ukraine this past July, killing 298 innocent civilians.

Russia can continue to feign ignorance, but this constitutes the most dangerous, deeply irresponsible escalation of violence and tensions in Ukraine since a little-observed ceasefire was signed in September.

With his economy in shambles and increasingly politically isolated from West, Putin seems determined to bring Ukraine down with him.

We have a moral obligation, not to mention considerable political interests at stake, in ensuring that this does not happen and that Ukraine is allowed to chart a course of successful, peaceful, and prosperous development as an intact and independent country.

As I have written and spoken about before, Western leaders must continue to present a united and uncompromising front when it comes to Russia’s naked aggression and flagrant disregard for international law in Ukraine.

The current sanctions regime must be strictly maintained, and the list of sanctioned officials updated regularly to reflect the complicity of the Russian governing elite in perpetuating the conflict in Ukraine.

Western leaders such as French President Francois Hollande have suggested that sanctions on Russia should be eased if they agree to participate in constructive talks.

Hollande and those who share his views must be reminded that Russia has agreed to sit down at the negotiating table several times, with the resulting agreements having little effect on reality.

It goes without saying that by this point no competent Western leader should take the wily Vladimir Putin at his word.

The movement of Russian forces into Ukraine signals that the Kremlin is invested in this conflict and is willing to devote significant resources, not to mention take great risks, in pursuit of victory.

America and the West must be no less invested in achieving peace, defending sovereignty, and protecting international norms by refusing to allow Russia to achieve its aims in Ukraine.

By sending regular Russian army forces into Ukraine, Putin shows that he understands the importance of this fight.

We must ask the question: do our leaders understand this too?

Unknown said…
"Amen" to much of what is posted with only several minor caveats:

(1) The only difference between the "war" that is now obvious and the war that has been obvious to all but the diplomatic community and the dreamers (since March of last year) is in magnitude and in intensity. Starting with Crimea, the war against Ukraine had been planned years ago and the involvement of Russian personnel, funds, military hardware, coordination, leadership and other assets have been there from the very beginning.

(2) If Russia had been capable of evoking the kind of support they deluded themselves into believing they had in the war zone and across southern Ukraine, they would not now be exposing themselves as the real power behind the so-called "separatists". They do not and never have had the support of more than a minority (25% at most) of the population. The whole concept of a "civil war" is and has been a bluff from the very beginning. Despite all their efforts to round up local conscripts - they have found little enthusiasm among the residents.

(3) Although the death and destruction that may come about from this heightened level of conflict is a tragedy and can be pinned on no one except Putin and his fellow cretins, it is probably just as well that he has pushed the "resolution" of this war to the forefront. The continuing freezing of the conflict in place and the ability of the Russians to dig themselves in to a point of irretrievable loss of that region to Ukraine will have come to a stop.

(4) Ukraine will more than hold its own in the next round, and the increased carnage and deployment that Russia will need to introduce in order to make any gains will alarm even the most pacifist-minded Americans and Europeans. Let us hope that the playing footsie with sanctions will be replaced by crippling blows to Russia's economy, and all-out military and economic support for Ukraine will begin.

(5) From all indications this war has become Putin's personal megalomania. He has surrounded himself only with those who think like he does and has distanced himself from those in his inner circle who are concerned about the longer-term negative implications for Russia. Putin believes that his äce"card is the continued support of the Russian public....and, of course, as long as he controls the media and the public does not feel the pain, he is likely to have their support. Say what you will about how isolated Russians may be from the truth, the dirty little, politically-incorrect secret is that this level of support (85%) for an entirely unprovoked invasion of a peaceful and formerly "fraternal" neighboring country is, unfortunately, a sad reflection on the mentality and character of a very large percentage - perhaps a majority - of Russians.

(6) In the larger scheme of things, it must be remembered that very few nations that had been held in bondage by larger foreign powers had achieved their independence through other than blood. Ukraine's faux-independence in 1991 was largely the result of the old Soviet dinosaurs discarding their red banners and posing as Ukrainian patriots, though much of the öld boy" network remained in place. The Euromaidan disrupted that facade and now Ukraine's real battle for independence has begun. Much blood has already been spilled. The only question is how much more will be spilled...but, make no mistake about it, this will be Ukraine's last battle after which it will be free both physically and psychologically of Russia or other foreign forces.

(7) And, finally, thank God that Ukraine has competent, committed, and patriotic leadership during this very dark period.
11:01 AM

Unknown said…
I support every word of this summery.
Thanks George.
3:24 PM

Scrat335 said…
[quote] And, finally, thank God that Ukraine has competent, committed, and patriotic leadership during this very dark period.[/quote]

You call politicians bent to prostituting their country to thre likes of the IMF and declaring a war they can't afford competent?