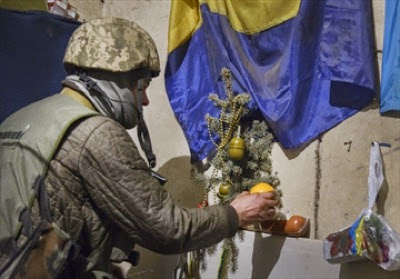 Ukrainian soldier decorates a Christmas tree with grenades on New Year's Eve in a shelter in the village of Peski near Donetsk in eastern Ukraine.

Civic activism is on the upsurge, and a new government team — populated with many foreign-born and western-educated ministers — is largely free from the control of the country's superrich, who dictated policy in the past.

In recent months, Ukraine's defences have strengthened since the Russian takeover of Crimea and the eastern industrial Donbas region.

Combat readiness has improved and weapons production is on the rise, as are the refurbishment and modernization of tanks, artillery and armoured personnel carriers.

With winter in full swing, the danger of a major Russian offensive has faded.

In many ways, Ukraine is intelligently addressing its key challenges: restructuring the national budget to avoid default and meeting the military threat posed by Russia.

Despite such important progress, however, a new threat is emerging: independently operating warlords and armed groups.

After the collapse of the Yanukovych regime in February and subsequent Russian aggression, Ukraine's new government was saddled with an ill-prepared military and required the help of thousands of volunteers.

These volunteer fighters were motivated by a patriotic desire to protect their homeland.

Many were veterans of the Maidan civic protests.

The fighters were mainly supported by grassroots financing from civic initiatives and small and mid-size businesses.

A minority of the fighters were ideologically motivated members of far-right movements.

These included the ultra-conservative Right Sector and the notorious Azov brigade, whose members had been shunned during the Maidan protests because of their white-supremacist, anti-democratic views.

Other volunteer brigades, such as the Dnepr-1, were recruited by business oligarchs, who financed them and commanded their loyalty.

During the spring and summer, many of these volunteer forces exhibited remarkable courage and helped stem the Russian-backed offensive.

In the months that followed, most were integrated into the interior or defence ministries as special-status units.

But now several of these units, especially those linked to oligarchs or the far right, are revealing a dark side.

In recent months, they have threatened and kidnapped government officials, boasted that they will take power if Ukrainian President Petro Poroshenko fails to defeat Russia, and they served as armed muscle in illegal attempts to take over businesses or seize local governments.

In August, members of the Dnepr-1 battalion kidnapped the head of Ukraine's state land fund to prevent him replacing an official deemed inimical to business interests.

On Dec. 15, these volunteer units interdicted a humanitarian convoy destined for the Russia-controlled Donbas, where a major emergency is emerging.

On Dec. 23, the Azov brigade announced that it was taking control of order in the eastern port city of Mariupol, without official approval from local or national officials.

Government prosecutors have opened 38 criminal cases against members of the Aidar battalion alone.

A pattern of blatant disregard for the chain of command, lawlessness and racketeering is posing a growing threat to Ukraine's stability at a critical juncture.

Concern about volunteer groupings is widely shared in the Poroshenko administration, which reportedly raised the question of dealing with these dangers at a meeting in November of his National Security and Defense Council.

Most alarming, however, is the role of Ukraine's interior minister, Arsen Avakov.

Instead of reining in these fighters, conducting background checks on their records and reassigning those who pass muster, he instead has offered them new heavy weapons, including tanks and armoured personnel carriers, and given them enhanced brigade status.

Amazingly, in September he even named a leader of the neo-Nazi Azov brigade to head the police in the Kiev region.

Equally worrying is the activity of Ihor Kolomoyskyy, the governor of Dnipropetrovsk oblast.

Kolomoyskyy, who played a crucial and widely respected role in stabilizing his East Ukrainian region, is now flouting central authority by interdicting aid convoys headed to the Donbas and permitting brigades he finances to engage in activities that contravene the law.

What can be done?

Poroshenko clearly wants this problem resolved but has been reluctant or unable to act.

For him to succeed will likely require co-ordination with Prime Minister Arseniy Yatsenyuk, who has also been slow to address the threat, possibly because Avakov is one of his key political allies.

Western donors, however, must make countering incipient warlordism a top priority and press Ukraine's leaders to reassign qualified members of the volunteer brigades into regular militia and military units.

Ukraine's elected leaders can no longer sweep this emerging threat under the rug for fear of stoking resistance or stirring up negative international headlines.

Ukraine faces many challenges, but it is heading in the right direction.

Nipping the problem of warlordism in the bud can only add to the country's strength and resilience.

Unknown said…
Mr. Guelph Mercury appears to be somewhat mercurial in his comments.

Ukraine has long been plagued with oligarchs and criminal "business" groups that simply raided enterprises with masked armed men and evicted the owners. This is not unique to Ukraine, but was widely practiced throughout the post-Soviet world. Today Putin and other "federated" war-lords continue doing the same but no longer have to be out-of-pocket in the hiring of goons. Their goons now wear official security service uniforms.

The new Ukrainian government arose out of the overwhelming public disgust with the corruption and lawlessness of the prior 22 years. Over a million people - 3% of the nation's population - had at various times assembled in Independence Square. A great many of the protesters stayed there for periods of up to 3 months. They were the ones who maintained law and order during a period when the only law and order was that of Yanukovych's thuggery. Naturally, they distrust government and - from the very first days - threatened that they would return to the Maidan - armed if need be - if the new government failed to clean house.

Everyone now recognizes that the volunteers stepped in at a time when the Ukrainian government was completely disoriented and without assets, and that they were absolutely essential in stemming the Russian tide sweeping into Donbass after Crimea. They paid dearly with their lives, limbs, and health but they succeeded at what the government was unable to accomplish. Much of the early "lustration" (or cleaning up) of the thuggish and traitorous security services was accomplished by Avakov.....hence he has remained a favorite target of Putin's infowar within Ukraine.

Despite all the noise the Kremlin has generated about the "right sector", this group - patriots and nationalists all - has only garnered 0.7% of the electoral vote.
I doubt if they threaten anyone except such deranged cretins as Zhirinovsky in the Russian Parliament.

The new government has made extraordinary progress on a full range of issues that had been at the core of Ukrainian frustration. The results of this progress may not be felt for months because even the most honest and competent of governments are not miracle workers. But they will come, they will be recognized and felt, and the inexorable weight of governmental pressure and power will smooth out the rough edges that always are present in momentous events such as the popular Ukrainian uprising.

Scrat335 said…
Hmmm. Any fool will tell you that when you unleash a bunch of crazed lunatic war dogs at some point you need to get them all killed or they come back sniffing for blood.

The junta failed at getting them all killed now they're pissing themselves at the scratching on the door.
6:01 PM

Your commentary stink. It is not a commentary at all, it is a poison for mind of any dissent human being.
5:08 PM