Putin's Ukraine War Is Back

January 21, 2015
KIEV, Ukraine -- The fighting in Ukraine has returned to an intensity not seen since last summer, and the government claims Russian weapons are once again streaming across the border to support the rebels. 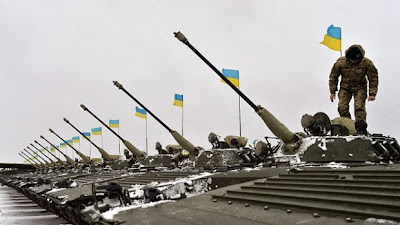 So it is a curious moment for the European Union's top foreign policy official to bring up the prospect of normalizing relations with Russian President Vladimir Putin.

Instead, the EU should be bracing to make sure that every member supports sanctions, because unanimity will be needed to extend them in March when they begin to expire.

The sanctions regime, with a hearty boost from low oil prices, has been helping to slow the Russian economy and thus pressure Putin to back away from the fight in Ukraine.

Yet the sanctions are vulnerable because several of the bloc's members -- including Italy, France, Hungary and the Czech Republic -- want them to end.

On Monday, EU foreign policy coordinator Federica Mogherini put forward a discussion paper outlining how Europe could gradually normalize its ties to Russia -- if Russia moves to end the crisis in Ukraine.

Mogherini insists that there is no question of lifting sanctions at this moment, but her paper said nothing about increasing them should Russia escalate the war, as previous EU statements and papers have done.

Hers is an attempt to steer a new course, and it sends exactly the wrong message.

There are arguments for easing the sanctions: They haven't stopped Putin's meddling, for one.

And they have damaged the fragile economies of the EU.

At the same time, Putin's captive news media have been able to exploit them to further stoke nationalist fervor at home.

Yet these pale next to the solid reasons to keep the sanctions in place.

To start with, there is evidence they have had an impact:

On at least two occasions, they have caused Putin to scale back aggression in Ukraine -- in May, when a threat to broaden sanctions pressured Russia to drop opposition to Ukraine's presidential election, and again last fall, when a Russian military buildup and rebel plans to take three Ukrainian cities evaporated.

Just as important is that exacting a price from Russia for its military aggression unites the EU behind the vital security interests of at least four members -- Poland and the three Baltic states.

The measures also serve as a financial disincentive for Putin to embark on military adventures beyond Ukraine, and they erode support for him among neighbors such as Belarus and Kazakhstan, now alarmed about what Putin may intend for them.

Everybody wants to see the sanctions removed someday.

Yet to do so before Putin withdraws Russian troops from Ukraine and its border, and before that border is put under the control of international monitors, would be to waste the pressure already applied.

It would also put significant trust in Russia's good faith -- even though there's been little evidence lately that such trust is warranted.

Russia continues to support the separatists militarily while lying about it.

Putin says he wants peace and even sent a letter to Ukrainian President Petro Poroshenko proposing that both sides withdraw heavy artillery from the front lines.

Yet this offer came only after a rebel assault had driven Ukrainian forces from the fiercely contested Donetsk airport and Ukrainian tanks were smashing their way back in.

A withdrawal at that point would have consolidated the gains of pro-Russia fighters, so Poroshenko refused, as Putin knew he must.

At the same time, Putin is cultivating far-right political parties in Europe that seek to break up the EU, including by lending 9 million euros ($10.4 million) through a Russian bank to Marine Le Pen's Front National in France.

It will in the future deliver gas to Europe only via Turkey and Greece, and it will be up to the EU to build a pipeline to collect it from there -- again going around Ukraine.

Putin seems always to assume the EU will be too weak and disunited to say no to him.

Until Putin puts a full Russian withdrawal from Ukraine on the table, the EU has to maintain its unanimous resolve.