January 15, 2015
BERLIN, Germany -- NATO Secretary-General Jens Stoltenberg has called on Russia to withdraw its support for separatists in eastern Ukraine and use "all its influence" to make them observe a cease-fire agreement. 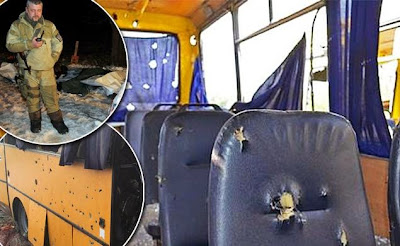 Speaking at a news conference in Berlin with German Chancellor Angela Merkel on January 14, Stoltenberg said, "We call on Russia to respect the [September 5] Minsk agreements, to use all its influence on the separatists to make them respect the cease-fire, and to withdraw the support for the separatists."

Stoltenberg said NATO wanted cooperation with Russia, but that if ties between the alliance and Moscow are to improve, "Russia must want it" as well.

"NATO does not seek confrontation with Russia. NATO aspires for a more constructive and cooperative relationship with Russia," he said.

Stoltenberg also said that Ukraine's recent abandonment of nonaligned status was "the beginning of a process which may end in an application for membership" in NATO.

He said that if Ukraine did seek to join NATO, it must first fulfill the main criteria for membership -- the existence of a democratic, open society and the capacity to contribute to the collective security of the alliance.

Merkel said she hadn't given up hope of organizing a four-way summit with the Russian and Ukrainian leaders.

But she said she didn't know how long that might take after tentative plans for a meeting in Astana this week were abandoned.

Foreign ministers from Germany, France, Russia, and Ukraine failed on January 12 to achieve enough progress for a proposed summit of the countries' leaders in Kazakhstan to go ahead.

But Ukrainian Foreign Minister Pavlo Klimkin said January 14 in Kiev that a "contact group" meeting of Ukraine, Russia, and the Organization for Security and Cooperation in Europe (OSCE) could be held in the next few days to consider a peace plan for Ukraine.

"We are working on this and I hope that the session will be held in the next few days, but the date must be agreed by the three-sided contact group itself," Klimkin said.

Meanwhile, Ukrainian Prime Minister Arseniy Yatsenyuk at a cabinet in Kiev on January 14 called on the international community to declare that the pro-Russian separatist entities in eastern Ukraine are "terrorist organizations."

Yatsenyuk's call came a day after a rocket struck a passenger bus in eastern Ukraine, killing at least 12 civilians who were traveling from the rebel-held provincial capital of Donetsk.

The rocket attack was the bloodiest attack in eastern Ukraine in months.

The Ukrainian military said the commuter bus was hit by a rocket in a barrage fired by pro-Russian separatists, while rebel leaders have denied responsibility.

Both the European Union and United States have condemned the rising violence.

Ukrainian President Petro Poroshenko condemned the bus attack as an act that "chilled the heart" and said the rebels "will have to answer for these deaths."

After meeting with regional governors in Kiev on January 14, Poroshenko also declared January 15 a day of mourning.

Poroshenko said the order commemorates "all those, who died from terrorists' actions, and first of all, those 12 civilians, who were killed at military checkpoint near the town of Volnovakha" in Ukraine's eastern region of Donetsk.

Poroshenko said the world was mourning the victims of attack together with Ukraine.

Poroshenko also promised that he would sign a decree on January 14 to deploy more troops to the front line.

In Washington, State Department spokeswoman Marie Harf said the bus attack and intense fighting around the Donetsk airport were "just the latest egregious violations of the commitments made by the Russian-backed separatists."

In Brussels, a spokeswoman for EU foreign-policy chief Federica Mogherini said the rising violence in eastern Ukraine underscored the need to abide by a cease-fire agreement reached in Minsk in September.

Russian Foreign Minister Sergei Lavrov called for a "thorough and objective investigation," saying that "various interpretations" of the attack "indicate that a number of versions of the event have surfaced."

Lavrov said all accounts of attack "ought to be sorted out thoroughly before pointing the finger at anyone, as our Western and Ukrainian colleagues love to do."

On January 13, the Russian Foreign Ministry's rights envoy, Konstantin Dolgov, told the TASS news agency that the bus attack was "another crime of the Kiev military."

Dolgov said Moscow was "outraged," and that the attack "undermines all peace settlement efforts."

The UN Security Council also condemned the bus attack, and called for an investigation to bring those responsible to justice.

The OSCE said on January 14 that some member states had temporarily withdrawn their observers from the Luhansk and Donetsk regions because of escalating violence there.

Meanwhile, a senior OSCE official called for maximum restraint from all sides in the conflict.

Ertugrul Apakan, the head of the OSCE special monitoring mission, also said the situation had "significantly deteriorated" over the past 24 hours, especially near the Donetsk airport.

His comments came after reports that the airport's control tower -- already heavily damaged from months of shelling -- had collapsed.

Although the rebels control the city of Donetsk, Ukrainian forces have managed to retain control over the city's airport, now mostly in ruins from the fighting.

In Kiev a parliamentary deputy said government forces had been given an ultimatum by the rebels to pull out of the airport by 5 p.m. local time on January 13, "or face destruction."

However, this could not be confirmed from the separatist side.

Regional authorities loyal to Kiev said the bus had been attacked by Grad, or hail, rockets at a government checkpoint near the town of Volnovakha.​

Volnovakha lies about halfway between rebel-held Donetsk and the strategic, government-controlled city of Mariupol on the coast of the Sea of Azov.

Ukrainian officials said a 2 1/2-year-old girl was killed in rebel shelling of Hranitne, a village northeast of Mariupol.

Rebel leader Denis Pushilin suggested Kiev may have orchestrated the attack as a "provocation" to blame the pro-Russian separatists. Almost 5,000 civilians and combatants have been killed in the conflict in eastern Ukraine since April.

Although the Minsk cease-fire had been routinely violated, fighting had subsided last month after another truce was agreed.

Kiev and the West accuse Moscow of fomenting unrest in eastern Ukraine and sending weapons and soldiers to help the pro-Russian separatists.

Moscow denies this although the rebels are now so well equipped with sophisticated weaponry that such denials are becoming less credible.

An AP reporter over the weekend saw a convoy of around 30 military-style trucks without license plates heading for Donetsk.

NATO's top commander, General Philip Breedlove, said on January 13 that there has been a continued resupplying and training of rebel forces over the holiday period.

Unknown said…
I'm always amused by diplomatic double-talk (e.g., "called on Russia to withdraw its support for separatists in eastern Ukraine and use "all its influence" to make them observe a cease-fire agreement. )

As President Poroshenko has so often stated, all that Russia has to do is to withdraw its forces, and ceasefire- voluntary or involuntary - would be restored in two weeks.

All this other nonsense about "using influence", etc. is balderdash. Pull the Russians out and the separatists will follow.
2:32 PM