Nadia Savchenko: The Most Controversial Prisoner Of The War In Ukraine

January 12, 2015
MOSCOW, Russia -- Somewhere behind the walls of Moscow’s pre-trial detention centre No 6, the Ukrainian MP and helicopter pilot, is slowly starving after 30 days of living on just water and tea. 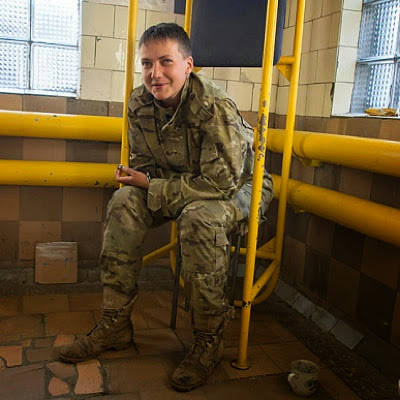 Sunday marks the 30th day of living on just water and tea for Nadia Savchenko, a helicopter pilot who fought in the Iraq war and newly minted Ukrainian MP.

She is on hunger strike in protest at what she says are fabricated charges of war crimes brought against her by Russian investigators.

She has become the most controversial prisoner of the war in Ukraine, with Vladimir Putin clashing with Barack Obama and Angela Merkel over her fate.

“She is still healthy. The doctors say her glucose and vitamin levels are all OK,” said her sister, Vera Savchenko.

“But four weeks is a very long time for a hunger strike. We’re getting to the point where it becomes dangerous.”

Vera has not seen or spoken to her sister since she was captured in battle by rebel fighters in eastern Ukraine seven months ago.

Neither she, nor Nadia, who flies Mi-24 attack helicopters for the Ukrainian army, ever considered themselves especially political.

But they instinctively supported an end to corrupt politics and a move towards Europe and both stood together on the square.

“I was not really an activist. Well, I brought warm clothes, I helped out, but I was not at the centre of things. Nadia was in the self defence,” said Vera, 31, referring to the paramilitary force assembled by the revolutionaries to maintain order and defend their camp from the police.

A career soldier who won fame for long battle with Ukraine’s military bureaucracy to become the country’s first female combat helicopter pilot, Nadia served in Iraq and her military experience - especially her first aid training - was valuable on those chaotic days.

Later she would go to war in eastern Ukraine, not as a pilot but as an ordinary infantry soldier.

Frustrated at not being deployed with regular armed forces when the war began, she took leave from her squadron in Lviv to join some of her old comrades from Maidan in the Aidar battalion - one of several volunteer militia groups formed at the beginning of the war.

According to Vera, who visited her sister at the front, Nadia was most valuable to the battalion as an instructor, a rare military professional able to teach raw volunteers the basics of soldiering and battlefield medicine.

But on June 17, in a chaotic battle, she was cut off, surrounded, and captured by separatist fighters loyal to the self-proclaimed Luhansk People’s Republic.

Three weeks later she appeared in Russia, where prosecutors said she would be charged as an accessory to murder for directing a mortar attack that killed Igor Kornelyuk and Anton Voloshin, two Russian journalists who were reporting the same battle from the other side of the lines.

What really happened is fiercely disputed.

While prosecutors claim she deliberately targeted the journalists, who were reporting from a rebel check point when they were hit, her defence team say they can prove she was captured a full hour before Mr Kornelyuk and Mr Voloshin were killed.

How she ended up on the other side of the border is also unclear.

Her defence team say she was transported as a prisoner after rebels handed her over to Russian agents.

Her sister, who travelled to Luhansk to personally negotiate her sister’s release, believes Nadia was already in Russia even as rebel commanders assured her that she was safe in their custody in eastern Ukraine.

The prosecution claims that she later crossed the frontier on foot independently, and illegally, and was was recognised and arrested when she presented her papers to seek asylum.

That explanation neatly absolves Russia’s secret services of accusations of kidnap, and also denies her the status of prisoner of war, which would make her eligible for prisoner exchanges.

It is a version of events Vladimir Putin recounted when he was tackled over the case by a Ukrainian journalist at a press conference last month.

“According to our law enforcement agencies, Ms Savchenko called in artillery fire via radio,” said Putin.

“[But] if it is reliably established during the investigation and the subsequent trial that she was not involved and is not guilty, she will be released immediately.”

In reality, said her lawyer Mark Feygin, this is an overtly political case - Miss Savchenko is a hostage in the ongoing confrontation between Moscow and Kiev - and “political cases in Russia are only ever decided in the Kremlin.”

Nonetheless, Putin’s answer provided a glimmer of hope for Ms Savchenko and her team, who are convinced that their evidence - mostly based on mobile phone location data - proves her innocence beyond doubt.

Ms Savchenko decided to resort to hunger strike to “achieve common sense from the Russian government and conscience from the Investigative Committee.”

She is far from alone in her predicament.

Roughly 30 Ukrainian citizens are currently in Russian custody, including Oleg Sentsov, a film maker who was picked up in Russian-occupied Crimea in May on suspicion of planning terrorist attacks.

For Nadia herself, it is not the the lack of food, but isolation from family, and especially her sister, that is most trying.

“The thing that gets to me most is that investigators have not allowed me to call my sister Vera,” she said earlier this week.

“It was her birthday on January 12. I’d have like to call her to say happy Christmas, happy New Year, happy birthday. I saw my mother for 20 minutes, but not my sister.”

Unknown said…
Putting aside all legal issues....charges and counter-charges.....this is a clear case of what is going on in Ukraine.

Savchenko stands for a vulnerable but courageous Ukraine standing up to the whole Russian super-power. While - after 7 months of imprisonment and plenty of opportunity to investigate and resolve whatever pitifully few claims Russia may have- the continued, unwarranted imprisonment of Savchenko demonstrates the whole brutality of a system and a society from which Ukraine is disentangling itself.
7:58 AM