More Than One Million Flee, Ukraine Close To 'Humanitarian Catastrophe'

January 11, 2015
LONDON, England -- More than one million people have been driven from their homes by the conflict in Ukraine, hampering aid efforts and leaving the country on the verge of a humanitarian catastrophe, aid agencies said on Thursday. 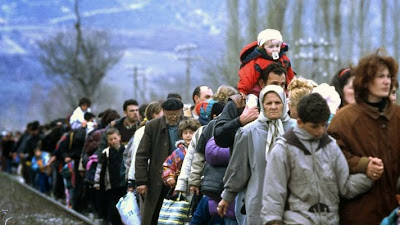 The number of people uprooted within Ukraine, 610,000, and of refugees who have fled to neighboring countries, 594,000, has more than tripled since August, figures from the United Nations Office for the Coordination of Humanitarian Affairs (OCHA) show.

The U.N. said an estimated 5.2 million people in Ukraine were living in conflict zones, of whom 1.4 million were highly vulnerable and in need of assistance as they face financial problems, a lack of services and aid, and harsh winter conditions.

The conflict between Ukraine and pro-Russia separatists, killed almost 5,000 people last year and provoked the worst crisis in relations between Russia and the West since the Cold War.

"While it may be too early to call this a humanitarian catastrophe, it's clearly progressing in that direction," Krivosheev told the Thomson Reuters Foundation by email.

The provision of humanitarian aid was being hampered by volunteer battalions that were increasingly preventing food and medicine from reaching those in need in eastern Ukraine, he said.

"Attempting to create unbearable conditions of life is a whole new ballgame... using starvation of civilians as a method of warfare is a war crime."

The battalions often act like "renegade gangs" and urgently need to be brought under control, Krivosheev added.

Social benefits, including pensions, have also become a major concern for those in eastern Ukraine following Kiev's decision to transfer the payments to government-controlled areas, the U.N. refugee agency (UNHCR) said.

UNHCR spokesman William Spindler said those unable to leave their homes, such as the elderly and the sick, and people living in institutions were not receiving the help they needed.

The problem was made worse by the fact that humanitarian organizations had limited access to the areas controlled by armed groups fighting the government, he added.

The crisis blew up after street protests in Kiev overthrew the Moscow-backed president last February and a pro-Western leadership took over, committed to integrating the former Soviet republic into the European mainstream.

This set Kiev and the Western governments backing it at odds with Russia, Ukraine's former Soviet overlord, which wants to keep Ukraine within its political and economic orbit.