Is Putin Turning To Terrorism In Ukraine? 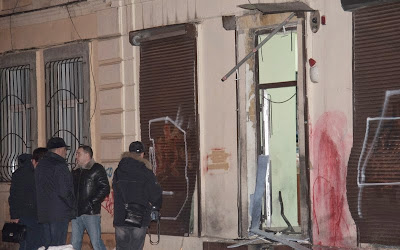 The bomb went off right on the porch of the local Euro-Maidan Coordination Council, where volunteers store humanitarian aid for Ukrainian soldiers fighting Russian-backed forces in the east of the country.

Authorities categorized the incident as “an act of terrorism,” the seventh bombing targeting strategic points of Odessa in the past few weeks.

The explosion destroyed the Council’s porch, tearing the entrance door to pieces, breaking windows in apartments on upper floors, and terrifying pedestrians on Gimnazicheskaya Avenue.

Fortunately nobody was hurt seriously.

But such are the tensions here that last week the central government in Kiev deployed two units of National Guards to launch an anti-terror operation in Odessa.

“We are convinced that money for terrorism comes from Moscow,” says Vitaliy Kozhukhar, a commander of Odessa’s self-defense forces.

The special services of Russian President Vladimir Putin “seem to be happily organizing explosions in order to destabilize life in our peaceful city, which to their frustration does not want to become a part of Russia.”

Terrorism is bad news anywhere, but especially rough on Odessa, where the city motto seems to be “make love, not war.”

It is the only tourist center Ukraine has left on the Black Sea, since Russia annexed Crimea last spring.

Its graceful hotels and beautiful restaurants are totally dependent on the tourist trade.

But most visitors stopped coming after the tragic events of May 2, when over 40 pro-Russian activists from the separatist movement and Ukrainian soccer fans were killed in a fire and in the violent clashes that surrounded it.

In 2014 only a tenth as many tourists came as had come the year before.

Instead, spa hotels filled up with over 30,000 refugees from the war-troubled Donbas region of eastern Ukraine.

The advent of terrorist bombings, even if they are targeting buildings more than people, will lead tourists to decide almost any place is better for a vacation than Odessa.

One bomb went off outside an office of the Council of Public Security on Dec. 10, another one destroyed railroad track outside Odessa on Dec. 24, right under a moving freight train.

Thankfully there were no casualties—the driver managed to stop the train immediately.

A few days later an as yet unidentified man carried one kilo of TNT explosives toward the headquarters of Ukrainian Patriotic Activists, but by accident the attacker was killed by his own bomb.

Last September, according to Dibrov, a group of five local men received an order from their alleged strategists in Moscow to fire at a checkpoint on the highway outside Odessa.

“They were provided with a mortar and promised to be paid in exchange for a video of their attack, but police detained them; on Dec. 26 all five of them were exchanged for Russian prisoners,” Dibrov said.

For now Odessa’s terrorists do not target civilians.

This week, a few days before Orthodox Christmas, the city’s parks and squares were full of families, and nobody seemed too concerned about safety.

“The terrorists’ message is addressed to us activists but they should know that their bombs will not stop our work,” says Sergei Sarafanyuk, a member of the Odessa Euro-Maidan Coordination.