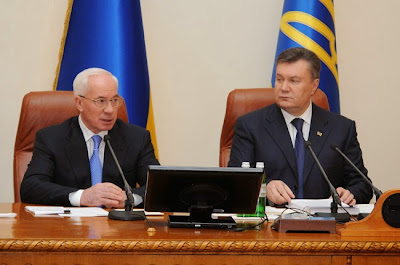 Mykola Azarov (L) and Viktor Yanukovych are wanted by INTERPOL.

The Red Notices, for charges including embezzlement and misappropriation, were issued on Monday 12 January 2015 following a thorough review by INTERPOL’s Office of Legal Affairs to ensure that Ukraine’s request for the notices was in compliance with the Organization’s rules and regulations.

Two other Red Notices linked to the case have also been issued for former Minister of Finance Iiuri Kolobov and Georgii Dzekon.

These Red Notices are not connected to a previous request made by Ukraine in March 2014 for a Red Notice to be issued for Viktor Yanukovych on charges including abuse of power and murder.

This request was assessed by INTERPOL as not compliant with the Organization’s rules and regulations and was refused.

A Red Notice is not an international arrest warrant and INTERPOL cannot compel any member country to arrest the subject of a Red Notice.

Red Notices are one of the ways in which INTERPOL informs its member countries that an arrest warrant has been issued for an individual by a judicial authority.

A Red Notice seeks the location and arrest of wanted persons with a view to extradition or similar lawful action.

The individuals concerned are wanted by national jurisdictions (or International Criminal Tribunals, where appropriate) and INTERPOL’s role is to assist national police forces in identifying or locating those individuals with a view to their arrest and extradition.

Red Notices are only issued to INTERPOL member countries if the requesting National Central Bureau has provided all the information required by the General Secretariat.

Any request by a member country for INTERPOL to issue a Red Notice is subject to the Organization’s rules and regulations.

This includes Article 3 of INTERPOL’s Constitution, according to which it is ‘strictly forbidden for the organization to undertake any intervention or activities of a political, military, religious or racial character.’

This prohibition is taken extremely seriously by INTERPOL.

Many of INTERPOL’s member countries however, consider a Red Notice a valid request for provisional arrest, especially if they are linked to the requesting country via a bilateral extradition treaty.

INTERPOL’s General Secretariat does not send officers to arrest individuals who are the subject of a Red Notice.

Only the national authorities of the INTERPOL member country where the individual is located have the legal authority to arrest.

In cases where arrests are made based on a Red Notice, these are made by national police officials in INTERPOL member countries.