January 12, 2015
MIUSYNSK, Ukraine -- Natalia Shevchenko, 57, doesn’t know if she and her husband are going to survive the winter. 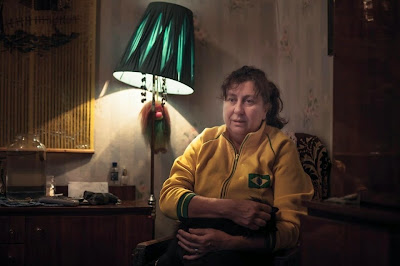 Natalia Shevchenko at home in Miusynsk.

Her last pension check arrived in June, and since then, she and her husband have eaten through most of the pickled tomatoes and canned food on their shelves.

“Now we understand that no one needs us,” she said.

Shevchenko lives in Miusynsk, a village in eastern Ukraine of fewer than 2,000 people that hugs the border between Luhansk and Donetsk, the two regions controlled by pro-Russian rebels fighting Ukrainian forces.

Elsewhere across the region, some help has trickled in.

Russian Cossack commanders have set up a soup kitchen for the elderly and distributed a one-time payment of 1,000 hryvnia, about $63, to pensioners in other cities.

Russian and international aid groups have delivered food, clothing and basic medical supplies to the cities of Donetsk and Luhansk.

Ukrainian aid trucks made a delivery to other parts just before the New Year.

But it appears that no humanitarian help has reached Miusynsk.

With no money and no food aid to speak of, many villagers here say they feel forgotten in the 10-month conflict that has left almost 5,000 dead.

International aid organizations warn that Miusynsk is an example of the growing risk for a humanitarian crisis this winter in the rebel-controlled areas as the conflict drags on and the region becomes more and more isolated.

Most of the village supported the pro-Russian movement that declared itself independent from a European-leaning Kiev after the massive Maidan demonstrations in 2013.

They patiently waited out the intense fighting that brought the front line through their village, just as it had during WWII.

In the wooded park in the center of this village, there is a memorial to Soviet veterans of World War II.

Freshly cut tree stumps surround it, a result of locals’ desperation to survive the latest conflict they have lived through.

People say they feel desperate and abandoned, forced to cut down trees for firewood and beg for food from the Russian Cossacks standing guard at rebel checkpoints.

To Shevchenko, Miusynsk’s slow starvation is yet another political game being played in this conflict.

The Ukrainian government on Dec. 1 canceled all state services and payments to rebel-controlled areas.

Teachers, doctors and pensioners were told to evacuate if they wanted their monthly salaries.

Banking services were cut off from the central banks in Kiev, leaving many of the 3.5 million civilians who still live in the conflict zone in a desperate situation for cash.

Unemployment has skyrocketed, since most of the region’s industries and mines were either destroyed or shut down.

With no money, civilians are finding it difficult to buy basic food supplies.

Pro-Russian rebel leaders, while promising to continue the fight against Kiev, now admit the self-declared people’s republics lack the infrastructure and funding to supply enough food to those who need it.

And medical supplies are dwindling at state hospitals to the point that “only the very basic procedures” can be performed, said Igor Bilodid, the deputy director of the Donetsk People’s Republic’s Center for Reconstruction.

“The Russian aid convoys are for the needy, but now almost everybody needs help,” he said, referring to the hundreds of white Russian trucks, which Ukraine says cross the border illegally.

Ukraine, the United States and NATO say Russia is supplying the rebels with weapons and finances, an accusation the Kremlin denies.

Despite warnings from the United Nations and other international organizations that the situation in the east is rapidly deteriorating, attempts to find a political solution to the conflict have been futile.

Peace talks moderated in Minsk, Belarus, by the Organization for Security and Cooperation in Europe have failed.

Ukrainian President Petro Poroshenko said he will meet with Russian, German and French leaders later this month in the hopes of speeding up the peace process, but few people in places like Miusynsk have faith it will return their lives to normal.

The high-level talks are confirmation to them that the conflict between the rebels and Ukraine was never about them.

“This war is about America versus Russia. That’s it,” Shevchenko said.

“No one is paying attention to what we wanted. We just wanted to speak Russian and be left alone.”

Now several politicians in Kiev are calling for legislation to further isolate the rebel-held areas financially.

Proposed legislation would place an embargo on any commercial trade with businesses in the rebel-held areas.

Rima Fila, a spokesman for the fund, said the trucks contained food and warm clothes for civilians living under rebel control — the same kind of aid the organization has been distributing for several months.

He said We’ll Help has been one of the biggest aid organizations operating in the region.

Without new shipments, they would would run out of supplies within two to three days, volunteers said.

But the battalions, backed by several newly elected Ukrainian parliamentary deputies who showed up to the checkpoint to inspect the convoy of 23 trucks, accused Akhmetov’s fund of sending supplies for the rebel fighters, including what they said were cigarettes and camouflage pants and jackets.

“We can’t allow the financing of these terrorists by allowing unknown shipments to cross over without Ukrainian approval,” said Hennady Moskal, the Kiev-appointed governor of the Luhansk regions that remain in Ukraine’s control.

About 40 percent of the oblast, or administrative territory, is still part of Ukraine, but there are daily firefights along the border with the rebels.

If the civilians living in the rebel-held areas are unhappy in their situation, they have the right to rise up against the “illegal terrorist groups” ruling their lands, Moskal said.

“Don’t underestimate our babushki,” he said, using the Russian word for grandmothers and referring to the large elderly population that remains in the rebel areas.

“They supported these armed, illegal bandits, and they can rise again and toss them out.”

Moskal’s blunt stance is little consolation to the pensioners in Miusynsk, however.

“We’re looking out for one another and help one another when we can. That’s all we can do,” said Valentina Semynina, 66, who sells baked goods from a kiosk on the village’s central street.

“Just the other day, we heard that one of the pensioners — an old man — was stuck in his house and unable to move about. So we sent one of the Cossacks over there to tend to him and bring him a little food.”

In anticipation of a cold winter, Shevchenko said she used most of her remaining savings to purchase as much coal as she could afford for the small stove that heats her home.

She is worried she will run out of the coal she has, so until the cold temperatures truly set in, she’s heating her two-room, first floor apartment with an electric space heater in the bedroom.

“Maybe if I ever get a pension, I’ll buy a bus ticket to Kiev and stand outside the parliament and scream at them like they did during the Maidan. I’ll tell them they should come see how we are living here now,” she said.

“All we wanted was for them to listen to us and to let us live the way we wanted. Isn’t that what democracy is for?”