January 17, 2015
KIEV, Ukraine -- A burst of violence in eastern Ukraine has cast further doubt over whether a planned summit can bring lasting peace, with at least 11 people killed in clashes between the army and pro-Russian rebels. 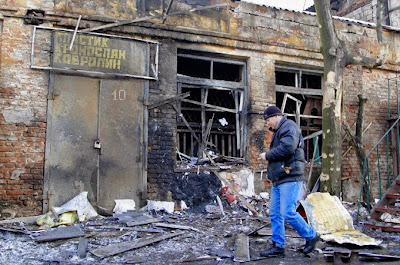 The latest fighting came as Ukraine's central bank chief issued a fresh warning that the country will need assistance from foreign donors to find its way out of a "full-blown financial crisis" while it also seeks to fund the war.

The International Monetary Fund has already approved a $17 billion loan package for Ukraine, but has said that the country may still require nearly the same amount again to fill a funding gap this year.

After weeks of relative calm, the new wave of violence has shaken eastern Ukraine, threatening all-out conflict and serving as a reminder of the war's worst days last summer.

Heavy artillery and shelling rocked the area around the Donetsk airport, a wrecked shell repeatedly hit by battles but still of symbolic and strategic importance.

After an overnight lull, there were further intense clashes on Friday, the AFP news agency reported.

Rebels had said on Thursday that they were on the verge of capturing the airport, but Ukrainian President Petro Poroshenko denied their claims on Friday.

As fighting flared, President Barack Obama said the United States and Britain backed continued sanctions on Russia over its actions in Ukraine, a tougher line than in some European capitals where support for the measures is weakening.

"We agree on the need to maintain strong sanctions against Russia until it ends its aggression in Ukraine and on the need to support Ukraine as it implements important economic and democratic reforms," Obama said during a joint press conference with British Prime Minister David Cameron.

In Kiev, one of Poroshenko's advisers spoke of intense fighting, calling it "the worst since late September," while military spokesman Colonel Andriy Lysenko said there had been a build up of rebel armoured vehicles along the front line in the Donetsk region.

At least six Ukrainian soldiers were killed and 18 others wounded, while five civilians were left dead on Thursday and Friday, officials said.

A round of contact group talks initially scheduled for later on Friday in Minsk between representatives of the OSCE, Ukraine and Russia, along with rebel leaders, appeared to have been put off in the latest of a series of delays.

The parties have not met since December 24.