Bitter Lesson In The Ukraine Conflict

January 17, 2015
BERLIN, Germany -- A new attempt at finding a solution for the conflict in Ukraine has failed. 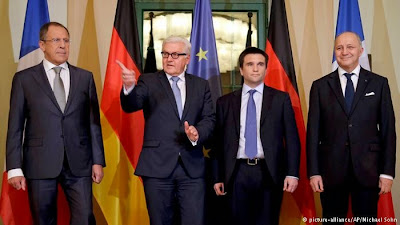 Berlin and Paris tried in vain: The summit on the Ukraine conflict that was to take place in Astana on Thursday will not be happening. Ukraine and Russia are not willing to compromise, says DW’s Bernd Johann.

Once again, the foreign ministers of Ukraine, Russia, France and Germany met in Berlin and once again, they left empty-handed.

For now, there will be no summit in the so-called Normandy format.

The meeting between the heads of state and government of these four countries that was set to take place this week in Kazakhstan's capital, Astana, will not happen.

After all, the four foreign ministers have been looking for diplomatic solutions for a long time.

Since the beginning of this year, they have intensified their efforts.

The new failure is especially bitter for the people in the Donbass region of Ukraine, whose situation is growing worse due to winter, among other things.

The ceasefire between the Ukrainian army and Moscow-supported pro-Russian separatists is very fragile.

Even the orthodox Christmas holidays saw violent combat with casualties.

So, the situation remains explosive.

Looking for peace in times of terror

The failed negotiations are also a bitter lesson considering that French Foreign Minister Laurent Fabius is working just as intensely on a solution to the bloodshed in eastern Ukraine as his German colleague Frank-Walter Steinmeier, despite the horrifying terror attacks in Paris.

One almost wants to call out: France seriously has other problems right now besides stopping the madness in Ukraine!

Fabius and Steinmeier deserve respect for their involvement.

Seldom has their been such a concentrated and intense effort for peace.

France and Germany, once on opposite sides of two world wars, know how valuable the peace in Europe is.

For this very reason, they leave no stone unturned to find a solution to the conflict - a conflict that's not only a war with the separatists in eastern Ukraine, but also a barely hidden war by Russia against Ukraine.

But the parties to the conflict are not very willing to compromise.

It's been the same way for months.

In the shadow of the terror in Paris, which is a threat to all European nations, Moscow and Kiev are both sending sad signals.

Both states did commiserate greatly with the grief for the victims of the Islamist terror in France.

But the suffering of the people in eastern Ukraine, where there have been almost 5,000 deaths to date, does not seem to move them in the same way.

No holds barred in Kiev and Moscow

There still seems to be some in Ukraine's leadership who believe in a military victory in eastern Ukraine.

Social benefits were cut in Kiev to fund a massive armaments program.

It's understandable that Ukraine wants to prevent the conflict in Donbass being frozen as is with all its might.

After all, this would mean another new border inside the country after Russia's annexation of Crimea.

Moscow hasn't given up on its aggressive plans against Ukraine either.

Their goal is political destabilization, which could eventually lead to a fragmentation of their neighbor.

The conflict in Donbass being frozen would be the basis to prepare take-overs of other parts of Ukraine.

So far, Russia hasn't done anything to alleviate these worries.

While the Paris terror attacks lead to a closer cooperation between the western European states to fight the common threat, Europe's east remains a worrying zone of instability.

Russia is isolating itself and presents a danger to its neighbors.

And Ukraine is in the midst of a war of attrition it can't find its way out of.

This, too, is a bitter realization.