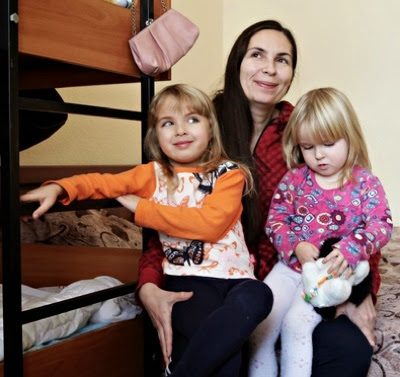 Businesswoman Oksana Kolyada, 35, with the daughters she took with her on fleeing Luhansk, which is controlled by pro-Russia separatists.

She took her six children with her.

That was in June.

“How could I raise my kids there?” she said.

“Who would guarantee their safety?”

Ever since, she has been living in a sanatorium, a dozen miles outside Kiev, set in a bucolic wood.

Home is a single room up on the fourth floor.

From the window you see snow.

The sanatorium, once used by holidaymakers taking a break from city life, now houses 250 people, most from Donetsk and Luhansk, in the Donbas region.

Nahiba went back to Donetsk last week to visit her elderly parents, whose home in the Petrovsky district is next to the frontline.

“At the end of their street is a Grad rocket launcher. You can see the rebels firing not far from their house. It’s terrorist tactics.”

She added: “My parents are afraid of the militias. They want everything to finish so they can live peacefully.”

She sees little prospect that her family will ever be able to go back.

Crossing into Donetsk – now run by the self-declared Donetsk People’s Republic (DNR) – was a terrifying experience, she said.

“I was on a bus. Armed soldiers dragged all the young men out. I thought they were going to shoot them. I left by train. At the station I saw a Russian tank. There were 20 militants, happy, sitting on it.”

According to the United Nations high commissioner for refugees (UNHCR), 514,000 people have been internally displaced in Ukraine since fighting began seven months ago.

Some 233,000 have left for Russia, Russia’s migration service says, with smaller numbers moving to other neighbouring states, including Belarus and Poland.

This fuelled another round of displacement.

Desperate pensioners living under the separatist DNR – or in the neighbouring Luhansk People’s Republic – are reregistering themselves in government-controlled towns.

Most of the internally displaced are camped out in regions next to the conflict zone, either living with relatives, in flats, or in collective centres.

The UNHCR speaks of a “deepening humanitarian crisis”.

Some have fled because they support a unified Ukraine.

In June, Oksana Kolyada, 35, a businesswoman, fled from Luhansk with her daughters Nastia, five, and Maria, two.

The previous month she had refused to take part in a separatist “referendum”.

“All my neighbours said I was a traitor. They watch Russian TV. It’s turned them into zombies,” she said, adding:

“I don’t want to go back. Bandits have taken over.”

In the sanatorium kitchen volunteers were making lunch.

The property used to belong to the elder son of Ukraine’s president, Viktor Yanukovych; father and son ran away to Russia in February.

Someone appears not to want the current residents there: last month, a grenade was thrown at the front door in the early hours.

Guest facilities such as the swimming pool and sauna are closed.

The bar has been converted into a second kitchen.

Residents still water the giant palm in the foyer, and tend an impressive climbing Chinese rose.

While many Kiev citizens have been generous, some landlords have refused to rent to incomers from the east, suspecting them of separatism or worse.

One new arrival, Anna Zaitseva, 40, said she came from Crimea two weeks ago.

An English teacher and one-time tourist guide, she said she left because she wanted to raise her 11-year-old daughter, Maria, as a Ukrainian.

“I want a Ukrainian future,” she explained.

The rest of her family stayed behind in the regional capital, Simferopol.

Zaitseva said that her parents were staunchly pro-Russian.

But she said their initial euphoria at Russia’s take-over had worn off.

“Putin and Medvedev predicted that millions of Russian tourists and state workers would visit Crimea. But they didn’t come,” she said, adding that meanwhile, enormous pressure was being put on residents to trade in their Ukrainian passports for Russian ones.

Some of those who have fled had little choice: the alternative was to be tried and possibly shot.

Ihor Todorov, a professor of international relations at Donetsk University, went on holiday in July for the academic vacation.

While he was away, the rebels appointed a new, fanatically pro-Moscow rector, Sergei Baryshnikov, who declared Todorov and 200 of his colleagues “ideological enemies” of the DNR.

Todorov said that 11 of the 16 lecturers in his faculty had moved to government areas.

He has a new university job teaching at Uzhhorod, a small, sleepy town in western Ukraine’s Transcarpathia region, on the other side of the country.

“We are not planning to return,” he said.

He described how his wife – also fired from the university – went back to Donetsk to collect their belongings.

“A neighbour spotted her and said: ‘I’ve seen your husband on TV. He supports Ukraine. I’m calling the [DNR] spy agency.’”

The estate includes a gigantic wooden club house, a themed pirate-ship restaurant and an array of tacky sculptures, including a leaping stag and a topless nymph.

Sixty-nine people, 29 of them children, live in a former house for bodyguards.

A family from Crimea occupies a cottage next door to Yanukovych’s private zoo.

Its neighbours are bears, birds and wild boar.

Her husband was a Ukrainian border guard, she said.

Could she go back?

“No. The FSB [Russia’s security service] would open a case against me.”

Marozova said that Chechen gunmen had taken her family’s cafe in Yevpatoria, a Soviet-era seaside resort with a Muslim Tartar past.

Communicating with them was difficult, she said, because of the widespread fear that phones were bugged.

She claimed that Crimea’s economy was in trouble, with few jobs, a falling rouble and no water for agriculture.

“All the local bureaucrats have been fired and replaced with people from Moscow,” she said.

The displaced Mezhyhiriya community also includes two political refugees from Russia who quit their own country in protest at Putin’s adventurist policies.

Luda Lihas, who lives with her five children in the zoo house, said she had fled Crimea because of the Kremlin’s clampdown on Islamic literature.

A Muslim convert, she said she was afraid.

Did she ever dream she would end up living in the president’s compound?

“It was destiny,” she replied.