Vladimir Putin State Of The Union Defends Aggression In Ukraine 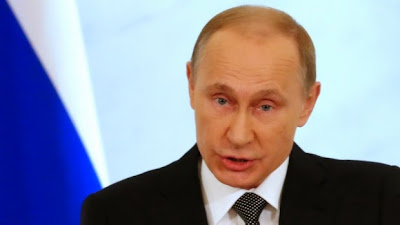 In his annual state of the nation address at the Kremlin in Moscow on Thursday, Russian President Vladimir Putin defended the Kremlin's aggressive foreign policy, saying the actions are necessary for his country's survival.

Russia annexed Ukraine's Crimean peninsula in March and was later accused of supplying pro-Russian separatists in eastern Ukraine with ammunition and manpower.

Putin said in his annual state-of-the-nation address at the Grand Kremlin Palace on Thursday that national pride and sovereignty are "a necessary condition for survival" of Russia.

"If for many European countries, sovereignty and national pride are forgotten concepts and a luxury, then for the Russian Federation a true sovereignty is an absolutely necessary condition of its existence," he told a full room of Cabinet ministers, lawmakers and community leaders.

"I want to stress: either we will be sovereign, or we will dissolve in the world. And, of course, other nations must understand this as well."

More than 4,300 people have been killed in eastern Ukraine in what the West and the Ukrainian government says is a conflict fuelled by Russian money.

Putin once again expressed his displeasure over the toppling of Ukrainian Presidential Viktor Yanukovych but did not offer any insight into what Russia's next actions in eastern Ukraine could be.

Although Russia is boosting its national defence budget, Putin said it is not going to get involved in an expensive arms race.

He said unspecified "unusual solutions" are at the nation's disposal.

"No one will succeed in defeating Russia militarily," he said.