US Slaps Sanctions On Putin's Biker Gang Over Ukraine

December 22, 2014
MOSCOW, Russia -- Vladimir Putin’s favourite biker has been targeted by new US sanctions against Moscow over the Kremlin’s armed intervention in Ukraine. 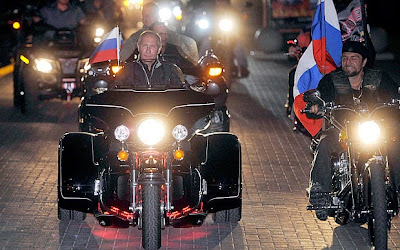 Russian Prime Minister Putin rides with motorcycle enthusiasts during his visit to a bike festival in the southern Russian city of Novorossiisk.

Barack Obama, the US president, issued an executive order this weekend prohibiting trade with the Black Sea peninsula of Crimea, which Moscow seized from Ukraine in March.

Among those added to the US Treasury blacklist are the Night Wolves biker gang, a group of denim and leather-clad ultranationalists that Putin has befriended.

Alexander Zaldostanov, 51, the leather-clad head of the Night Wolves who frequently meets with Putin, was also on the list, along with prominent figures from the pro-Moscow rebel authorities who are fighting government troops in eastern Ukraine.

Also on the list was Natalya Poklonskaya, a 34-year-old prosecutor from Crimea, whose good looks and staunch criticisms of Ukraine’s pro-Western independence movement made a hero in pro-Kremlin circles earlier this year.

She became an internet sensation when she was appointed in March, attracting a particular following in China and Japan where she prompted a wave of anime fan art.

The US Treasury said the Night Wolves were being targeted because members of the group served in an armed group in Ukraine and took part in storming a natural gas facility and the naval headquarters in Sevastopol.

On Saturday, the bikers’ leader told a Moscow radio station that he wanted to thank Mr Obama for “appreciating” his achievements by adding him to the list.

“I’ve already been called and congratulated by about a hundred people,” said Zaldostanov, with whom Putin has ridden on a Harley Davidson trike.

“I would very much like to thank Obama for recognising my modest services to the motherland. And I promise that I will do all I can so that his concern for me only grows.”

Poklonskaya, who has threatened to deport anyone from Crimea who does not recognise its annexation, posted a picture of herself smiling broadly on Facebook and wrote in a post in English and Russian peppered with smiley symbols:

“Thanks for the new sanctions, the United States! The European Union, Switzerland, Canada, Australia, Japan, USA... Who is next?”

Mr Obama’s order prevents US companies from importing or exporting any goods or services from or to Crimea.

It also prohibits individuals or companies buying real estate or businesses there, or financing Crimean companies.

People added to the Treasury’s “specially designated nationals” list have their assets blocked in the United States and US citizens are “generally prohibited from dealing with them”.

The US measures were announced a day after a European Union ban on investment in Crimea, which halts European help for Russian Black Sea oil and gas exploration and outlaws European cruise ships from calling at Crimean ports.

Canada has also announced a raft of new sanctions.

Russia’s foreign ministry issued a sharp-worded response to the new measures on Saturday.

“The rationality of the initiators of such decisions arouses growing concern,” said a spokesman, suggesting sarcastically that a change of mind could never be ruled out.

“The White House needed half a century to recognises the futility of its sanctions blockade against Cuba. Well, we will also wait.”

The spokesman added: “We remind those who are still labouring under the illusion that the whole world needs to live as Washington and Ottawa dictate: Crimea is a primordial and integral part of Russia.”

Moscow would “start to develop counter-measures” to the Western sanctions, he said.

It was unclear if the sanctions against individuals and groups would have much significant impact, as separatist militia leaders and patriotic Russian biker gangs are unlikely to keep assets in the United States.

Measures against the tourism and oil and gas sectors could cut deeper, but Sergei Aksenov, the leader of Crimea, claimed that the sanctions merely repeated those already introduced by the US and EU “in the first days of the Crimean Spring”.

“Since those first days, western ships have not entered our ports and western airlines have not visited our aerodromes,” he said, calling the new measures “much ado about nothing”.

“They [the US and EU] have probably got nothing better to do.”

Putin was predictably robust in defence of the annexation of Crimea when he gave his annual press conference on Thursday.

Russia’s economy has faltered amid western sanctions and a falling oil price, and the sliding rouble hit an all-time low on Tuesday when it reached 79 to the dollar.

However, asked whether the downturn was Russia’s “payback” for seizing Crimea, he answered:

“This is not payback for Crimea. This is actually the price we have to pay for our natural aspiration to preserve ourselves as a nation, as a civilisation, as a state.”

Putin ducked a question about how many Russian soldiers were fighting in eastern Ukraine.

Kremlin support for the rebels of the Donetsk and Luhansk “People’s Republics” appears to have been scaled back in recent weeks amid a shaky ceasefire.

Analysts say Moscow has no intention of incorporating the region into Russia, as it did with Crimea.