Uprising And Heartbreak: For This Activist-Turned-Parliamentarian, The Crisis In Ukraine Can’t Get More Personal 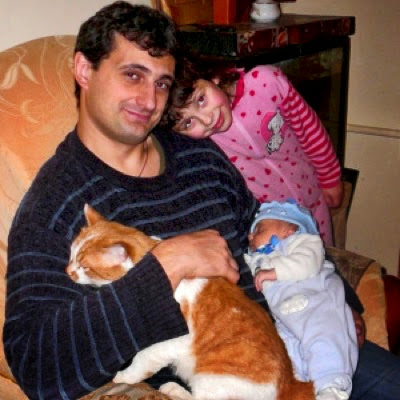 She opened the most important first, from her husband, who was fighting pro-Russian separatists in eastern Ukraine.

“Storming Ilovaysk. Losing the connection, so don’t worry. I love you,” his text read.

She tapped out her reply — “I love you very much. Hold on” — and then she read the next text.

This one, from Ukraine’s Ministry of the Interior, brought the stark notification her husband, Mykola Berezovyi, had been killed in action.

“It turns out I was writing to a dead man,” she said.

It was another dramatic milestone for the 35-year-old, who spoke at length with the National Post Thursday during a visit to Toronto from Ukraine’s capital of Kiev.

Despite her gentle frame and relative youth, the highs and lows of her life reflect, at almost every turn, the recent history of her troubled country.

And, similarly, her husband’s death seems an allegory for the deficiencies in Ukraine’s continuing fight with pro-Russian separatists and their Russian backers.

In a short, frenzied span, Ms. Chornovol has been a journalist, an anti-corruption crusader, a leader in the Euromaidan protests, the victim of a savage — likely politically motivated — beating, a makeshift soldier and, just three months ago, was elected to Ukraine’s new parliament.

It has been a journey of shock, elation and profound sadness.

A year ago, the protests against then-president Viktor Yanukovych were at full throttle.

As street battles raged in Kiev’s main square over control of the government and direction of the country, Ms. Chornovol and Mr. Berezovyi, who had met at a political rally and had two children, were among the protagonists.

For years she had railed against corruption in her exposés.

Her journalism skewed increasingly toward activism — such as pulling down the president’s hunting lodge on his sprawling leisure property — to draw attention to the sources of his wealth.

Her agitation brought a vicious reprisal during the height of the Euromaidan foment.

Last Christmas Day, hours after publishing another embarrassing story on a high government official, she was run off the road and dragged from her car.

At the side of the road she was viciously beaten and left for dead.

Photos of her battered face caused international outrage and condemnation.

Today, she seems remarkably unaffected by the thrashing, saying only the attack left her “physically beaten but not psychologically broken.”

The success of the protests in ousting Yanukovych in February and bringing in a new government did not restore peace.

Russia quickly moved to annex Crimea, then began fomenting agitation in the Donbass region of eastern Ukraine, where many Russian-speaking citizens already did not like the pro-Western tilt of the new government.

Euromaidan protesters were among the first to head east to challenge the separatists.

They were a ragtag group.

Many went to a sporting store to buy their own hunting rifles as their only armament for the battlefield.

“We were fighting like cowboys in the Wild West with antiquated weapons,” Ms. Chornovol said through an interpreter.

By the end of May, the government started issuing the volunteer brigades proper weapons.

“We learned to use these weapons by going onto the Internet. That’s how we took a crash course in defending ourselves,” she said.

They Googled how to fire rocket-propelled grenades and practised in a field near Mariupol, where her husband headed a unit of 30 fighters.

“Kitchen appliances are harder to use than old Soviet weapons. They may seem primitive but they are easy to use and effective,” she said.

Torn between the front line and Kiev, where she was asked to work with the new government on anti-corruption initiatives, she decided she was needed most in the capital and returned three days before her husband’s last battle.

Mr. Berezovyi and his unit were fighting to retake Ilovaysk, a rail hub.

They advanced on foot behind an armoured vehicle, she said.

Then, the vehicle broke down in the midst of the advance.

Next, the heavy gun atop it also fell silent.

Without covering fire, the Ukrainians were easy targets for enemy snipers.

Her husband ran to help a fallen fighter and was dragging him to safety when he too, was hit, in the leg.

Another fighter helped them both away from the line of fire, but not before the first fighter was struck and killed.

Apparently not realizing how badly he was injured, Mr. Berezovyi bled to death soon after.