Ukrainian Bessarabia: Towards The Unknown Region

December 31, 2014
KIEV, Ukraine -- The isolated region of Ukrainian Bessarabia, which is also known as Budjak, has become one of the latest places for Ukraine-watchers to worry about. 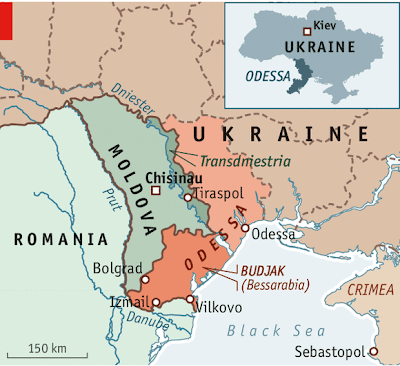 A little-known place that interests both Ukraine and Russia.

Many of the inhabitants fear a spread of the war from eastern Ukraine.

Geography gives their region great strategic importance, especially if the Russians were ever tempted to try to carve a land corridor across to Crimea, Odessa and the Romanian border.

Ukrainian Bessarabia is bounded by the Black Sea, the Danube and Moldova.

The Russian-controlled breakaway region of Transdniestria is to the north.

There are no roads, bridges or ferries across the Danube to Romania and only two roads connect the region to the rest of Ukraine.

If the bridges over the Dniester were blown up, it would be cut off.

Fewer than half of the region’s 570,000 people are Ukrainian.

The rest are Bulgarians, Russians, Moldovans, Gagauz or Albanians.

Many have a benign view of Russia, which gave their ancestors land and freedom 200 years ago.

Almost everyone speaks Russian and many complain that Ukraine has done little for them.

This was a problem before Ukraine’s 2014 revolution, he says, but it is worse now.

The result is a contradiction.

For pro-Ukrainians such as Mr Rusev, too many fellow Bessarabians hope vaguely that “Putin will solve all their problems.”

Few have any faith in the government in Kiev.

Yet according to Anton Kisse, a local politician, at the same time as many feel sympathy for Russia, they also favour Ukraine’s unity.

Sergey Dibrov, a journalist in Odessa, believes that, given the region’s ethnic make-up, any declaration of independence would see the region splinter into bits.

In the autumn there were rumours of plots to proclaim a pro-Russian Bessarabian People’s Republic, along the lines of the separatist republics in Ukraine’s Donbas region.

Yet war in the east has dampened enthusiasm for separatism.

A tragedy last May which saw dozens of pro-Russian activists killed in a fire in Odessa has also chilled any desire for revolt against Kiev.

Pro-Russian leaders have fled and opportunistic politicians have shifted towards supporting the unity of Ukraine.

The question is what Russia wants.

State power has changed hands nine times in Bessarabia in just over 200 years.

Locals report seeing drones, some perhaps from Transdniestria and some that may have come from ships of Russia’s Black Sea fleet, based in Sebastopol.

Even so, Ukraine’s flag looks likely to fly over Bessarabia for some time to come.

Unknown said…
If Russia is allowed to tamper with Budjak, the problem this could pose for the EU and NATO may prove to be even greater than the current crisis in east Ukraine.

Ukraine now serves as a de facto buffer for Europe from having a Russian presence alongside several European NATO countries(Poland, Slovakia, Hungary, and Romania). In facing off against its ancient foe in the east, Ukraine has reinforced its buffering status with a rapid build up of armed forces to a level that it now has the largest combat-ready force in all of Europe. This will be further reinforced in 2015 with a series of mobilizations that will allow Ukraine to develop a large reserve force with training for extensive partisan warfare if Russian armies should break through as part of their strategic planning for Nova Rossiya.

However, Budjak directly borders Moldova and Romania. There is no "buffer" in Budjak. Moldova is very weak and Romania, with its large Hungarian population, and an increasingly chauvinistic, pro-Putin Hungary on its other border may find itself deeply embroiled in a Russian- sponsored and funded nightmare from bases in Budjak and Transdniester....the perfect storm for a replay of World War I.

Ukraine - with its tightly stretched resources - can not be expected to divert much attention to Budjak to counter what may be serious incursions from Russian-controlled Transdniester. If Transdniester, with its large Ukrainian population, should seek to destabilize Budjak, Ukraine may be forced to enter Transdniester.

Whatever the outcome, it should be clear to European and American strategists that this problem requires immediate prophylactic attention, and that Ukraine is not in a position to do so on its own. NATO has to reinforce Ukraine's control of Budjak with a variety of technical and material support so as to minimize the risk of "green men" appearing in that region and to raise the level of risk to Transdniester high enough so as to discourage its mischief-making.

Europe should recognize that Transdniester is nothing more than a festering sore occupied by a hostile military force and a center for criminal activity and destabilization in that area of the world.
8:53 AM

carol said…
Sad news that war is spreading...war in any region is bad for humanity!!