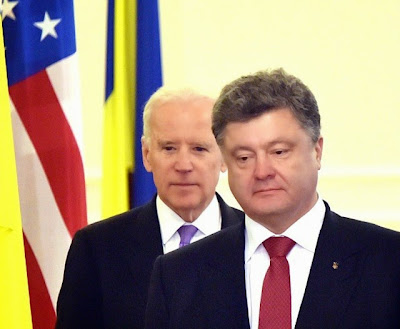 Even though the struggling country's new cabinet now contains three high-profile foreigners, it remains the focus of a crude internal power struggle that will hamper crucial economic changes and could lead to a financial meltdown.

After an International Monetary Fund mission concluded its work Nov. 25, the IMF stated that "discussions will continue after the new Ukrainian government is formed."

That meant Ukraine wouldn't find out when it might receive the much-needed next tranche of an IMF bailout package until Poroshenko complied with Biden's wishes.

Pro-European politicians who form the ruling coalition rushed to find a compromise on the attribution of cabinet portfolios.

The resulting lineup is a motley crew.

The coalition parties distributed the rest of the 19 posts on a quota system, and Poroshenko had the parliament approve the lineup en bloc, avoiding individual votes for each minister.

Poroshenko granted them Ukrainian citizenship yesterday, hours before the parliamentary vote that approved the appointments.

The nationalities of the three officials sent a clear message: Ukraine aspires to be a U.S. ally and a good IMF client, and it admires the reforms that rid Lithiuania and Georgia of their Soviet economic and cultural heritage.

The choice of personalities, however, is less straightforward.

Jaresko, who grew up in a Ukrainian family in Chicago, has lived in Kiev for 20 years.

She started her career in Ukraine distributing U.S. government aid to small and medium-sized businesses, then co-founded a small private equity firm, Horizon Capital, which has invested $255 million in Ukrainian companies.

She has a few successful exits under her belt and an untarnished reputation as a thorough and enthusiastic manager, as well as a competent financier.

She has no experience of the convoluted Ukrainian budget, however, and the finance minister will have to cut spending by about 10 percent of gross domestic product within weeks, a group of international economists recently concluded.

Jaresko will need to learn quickly and act decisively in an unfamiliar, antiquated bureaucratic environment with elaborate, ritualistic paper-based procedures and lots of political traps.

Abromavicius, too, was living in Kiev at the time of his appointment.

A partner at the Swedish investment company East Capital, he is married to a Ukrainian.

But he also was responsible for managing East Capital's Russian investments, the core of the company's business.

East Capital Russia Fund has been underperforming for a while: Its five-year return is minus 6.63 percent, according to data compiled by Bloomberg, and the fund's net asset value is down 55 percent from its 2007 peak.

Yet, according to Larisa Burakova, who wrote a book about Saakashvili's libertarian reforms, Kvitashvili had no part in designing and implementing the large-scale privatization of Georgia's health care system.

Kakha Bendukidze, the real architect of Georgia's economic transformation, told me in one of his last interviews before he died last month that Ukraine had to get rid of many of its ministries and state agencies.

"Who needs them when the government's sole function these days is to take money from the International Monetary Fund and pass them on in payment for Russian gas?" he asked.

Doing that, however, would have made it difficult for coalition parties to reach a compromise because there would have been fewer portfolios to hand out.

The new cabinet even added one portfolio -- an Information Ministry.

It will be headed By Yuri Stets, who ran Poroshenko's Channel 5 TV and is a close friend of the president.

Stets had recently vowed not to accept any appointment from Poroshenko because it would be seen as a conflict of interest.

Now he is setting up an agency whose goal will be to counter Russia's anti-Ukrainian propaganda.

The new appointment created a furor among Ukrainian journalists, who fear Poroshenko has created a ministry for censorship and propaganda.

There was another reason for Poroshenko's dismissal of legislators' requests that each minister be approved separately.

Such a procedure would have buried the coalition compromise.

Voshchevsky's chances of separate approval would have been slim, but now he has the job.

Some pro-European legislators, including those elected on Poroshenko's party ticket, were openly dismayed at this heavy-handedness.

Borys Filatov, a close ally of billionaire Igor Kolomoiskiy, called the vote a "disgrace" and an example of "non-transparent Byzantian policies."

"It's a great way to mess up something the country badly needs, no matter what pretty words are used to cover it up," he wrote on Facebook.

An official in Poroshenko's party told me the president's plan was to undermine Yatsenyuk's power over the cabinet and perhaps allow him to fail before Team Poroshenko moved in.

At the same time, Poroshenko faces a growing rift with Kolomoiskiy, who runs the important Dnepropetrovsk region and finances much of Ukraine's war effort in the rebellious eastern regions.

This political maneuvering has nothing to do with driving down Ukraine's 20 percent inflation, cutting exorbitant government spending on pensions and energy subsidies and eliminating corruption.

According to Transparency International's 2014 Corruption Perceptions Index, Ukraine is the 142nd most corrupt of 175 countries, up just two spots from 2013, when Yanukovych's shameless regime ran the country for personal enrichment.

Pro-European Ukraine, according to the index, is more corrupt than Vladimir Putin's Russia, in 136th place.

Although the new cabinet lineup makes the requisite symbolic nods to Ukraine's Western orientation, and provides the IMF with a comfortable negotiating partner in Jaresko, it is another step toward turning Ukraine into a failed state.

The "revolution of dignity" that freed many Ukrainians from a feeling of inferiority early this year will probably need to continue before the country finally sheds the burden of its Soviet past.