December 30, 2014
KIEV, Ukraine -- Ukraine's parliament backed a budget for 2015 on Monday that it had been under pressure to approve to secure the next tranche of financial aid under a $17 billion International Monetary Fund loan package, the Interfax news agency reported. 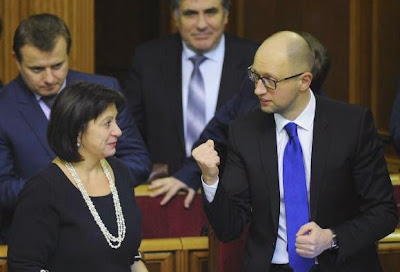 Ukraine's Prime Minister Arseny Yatseniuk (R) reacts during a session of the parliament in Kiev December 29, 2014.

Before the budget vote in the early hours of the morning, deputies approved a series of austerity laws, including an amendment to impose additional duties on imports, that Prime Minister Arseny Yatseniuk warned could prove unpopular with Ukraine's foreign trade partners.

Foreign currency reserves have more than halved since the beginning of the year to a 10-year low, due to gas debt repayments to Russia and efforts to support its struggling currency, the hryvnia.

"A series of articles will change depending on what we agree with international lenders," Interfax quoted him as telling parliament.

He said these discussions would start on Jan. 7.

Voting was delayed as deputies debated the merits of the law amendments required for the budget, with some arguing they unfairly increase prices for Ukrainians, many of whom are already struggling to make ends meet as the economy teeters on the edge of bankruptcy.

One new law will add 10 percent duty to taxes on food imports and an extra 5 percent on other imports excluding strategic imports such as gas.

"Problems could arise with our trade partners," Yatseniuk told parliament, advising that the law should only come into effect once the government had consulted on it with international partners.

He said one of the main focuses of the new budget was defense and security spending, which will amount to 90 billion hryvnia ($5.7 billion).

A year of revolution and war with pro-Russian separatists has pushed the hryvnia to record lows and crippled the economy, which is forecast to shrink 4.3 percent next year.

This month, Kiev said it needed the IMF to expand its bailout program due to the worsened economic outlook, but the Fund and Ukraine's other Western backers have made it clear any further financial assistance will hinge on Kiev's ability to implement the long-promised reforms.