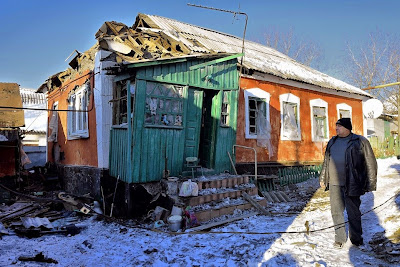 A man surveys his house on Friday after it was destroyed by shelling in the eastern Ukrainian city of Donetsk, which is controlled by rebels.

The slide to just under $10 billion adds to the pressure on Ukraine’s newly appointed government, already grappling with Russian-backed separatists in two eastern regions as well as withering economic output and a coal shortage that contributed to rolling blackouts this past week.

It also presents a dilemma for the West, which has been reluctant to hand over more cash without clearer evidence that Ukraine will deliver on pledges to overhaul its bureaucratic and corruption-plagued economy.

Discussions on a new loan package—which could amount to some $4 billion—have picked up in recent days as Kiev’s financial situation has worsened, with the incoming German presidency of the G-7 playing an important role in marshalling backing, according to several officials familiar with the discussions.

Finance ministry officials from most G-7 countries discussed the issue at a meeting on Thursday, one of the officials said.

Talks were still at an early stage and it wasn't clear how quickly any package could go.

According to the officials, the plan would have half of the money coming from the European Union and the other $2 billion from the rest of the G-7, which includes the U.S., Japan and Canada as well as four EU members.

EU finance ministers are expected to discuss Ukraine’s financing needs at a meeting on Tuesday. Ukraine has already requested a €2 billion ($2.5 billion) balance of payments loan for 2015, which EU officials have said is probably too much.

The 28-nation bloc has already committed to lend Kiev €1.6 billion, most of which has already been disbursed.

The U.S. has made clear that any additional financing must be in conjunction with the $17 billion IMF lending and economic policy-overhaul program approved in April.

Ukraine needs to pass a tight budget for next year, among other overhauls, to land the next IMF tranche of nearly $3 billion.

EU officials said this week the IMF has estimated that Ukraine may need up to $15 billion in extra financing needs through the first quarter of 2016, as the toll of the conflict in the east weighs on government finances and economic growth.

Horse-trading over a new cabinet after elections in October delayed the formation of a new government in Kiev until Tuesday.

The new, U.S.-born finance minister has said a budget will be ready by Dec. 20.

An IMF mission is set to return to Ukraine on Tuesday for further talks on releasing funds, the IMF said.

Ukraine’s central bank said Friday its reserves dropped 21% to $9.97 billion in November from the previous month, after paying off some debt for natural gas deliveries owed to Russia, and servicing other debts.

Reserves are now at their lowest since December 2004, when they stood at $9.71 billion.

Analysts said the reserves now cover a little over one month of imports, while the IMF recommends reserves equivalent to at least three months of imports.

The national bank spokeswoman said reserves were “enough to cover all current liabilities.”

Olena Bilan, chief economist at Dragon Capital brokerage in Kiev, said the IMF and other sources will need to bolster the loan package with an additional $12 billion.

Ukraine’s latest financial troubles come amid an electricity shortage that has resulted in rolling power cutoffs since Monday by the national energy company, Ukrenergo.

Energy Minister Volodymyr Demchyshyn said Friday that a power unit at a nuclear plant that has been offline since the end of last month will start working again Friday evening.

But Ukrenergo statistics show there will still be a shortfall in electricity, in part because of a coal shortage as many of Ukraine’s mines are in an area controlled by the separatists.

There has been a fresh push in recent days to halt the deadly fighting that has persisted in various hot spots despite a Sept. 5 cease-fire.

Six Ukrainian soldiers were killed in the last 24 hours and 13 wounded, a security spokesman in Kiev said Friday.

Russian Foreign Minister Sergei Lavrov said Ukraine and separatists were close to agreeing on a demarcation line that could help cement the cease-fire.

“Now those talks…are intended to agree a demarcation line in such a way that the sides really respect it,”  Lavrov told reporters in Basel, Switzerland.

“It isn’t easy, but I think that they are close to agreement.”

The talks are taking place in eastern Ukraine between Ukrainian and Russian officers and representatives of the militants. Ukrainian President Petro Poroshenko said this past week that Ukrainian forces would observe a “day of silence” in the east on Tuesday.

It is unclear whether the initiative has been agreed with the militants, although some rebel officials say they are not opposed to the idea.