December 23, 2014
KIEV, Ukraine -- Ukraine may stop supplying electricity to separatist-held eastern regions if the territories do not adhere to consumption limits imposed across the country due to an energy crisis, an energy ministry official said on Monday. 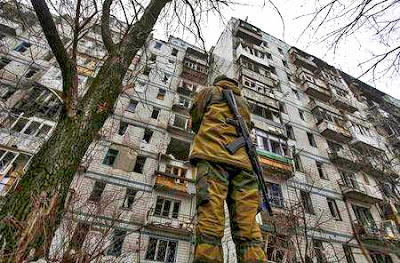 Ukraine used to be self-sufficient in electricity, but months of fighting the pro-Russian uprising has disrupted coal supplies to thermal power plants, which traditionally generate around 40 percent of the country's power.

"In order to save the power system we need to impose limits on everyone ... there are no regions of Ukraine that will not be subject to rolling blackouts," Deputy Energy Minister Oleksander Svetelyk said at a briefing.

Referring to Donetsk and Luhansk regions, controlled by rebels who want independence from Kiev, Svetelyk said they would have to ration electricity consumption or face being cut off entirely.

"We warned them today that if they don't turn off like the others (regions), we will turn off flows," he said, adding that the country faced a daily deficit of 3,500 megawatts (MW) or 12.5 percent of its needs.

Kiev stopped paying pensions and social benefits in Donetsk and Luhansk out of worries the funds would end up in rebel hands, but said in November it would continue supplying gas and electricity.

Ukraine has looked to buying in coal from abroad to restock the depleted reserves, but potential supplies from Russia have been held up at the border and a coal deal with South Africa collapsed amid allegations of corruption.

Kazakh President Nursultan Nazarbayev said on Monday Kazakhstan had agreed to supply coal to Ukraine, but did not give details on volumes or the time frame for deliveries.

Any supplies would have to be shipped through Russia.