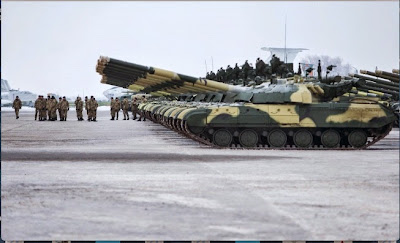 Poroshenko said: “We are providing the troops with new armored vehicles, precise anti-tank means, counterbattery means, means of communication and protection systems. At the same time, we are holding negotiations with our partners on the procurement of modern weapons that are not produced in Ukraine.”

Weapons bought from other countries can be paid for only with borrowed money, because the Government of Ukraine is basically broke and soaring even deeper into debt, and is sharply cutting back on pensions and other expenditures than military, which is receiving the Government’s virtually total focus.

Any added loans will never be able to be paid back, because Ukraine will not be able to pay back all of the existing loans.

Consequently, all countries that are now ‘lending’ additional funds to Ukraine are simply donating to Ukraine.

Furthermore, the IMF is demanding that the breakaway Ukrainian areas be conquered in order for additional loans to be made to the Ukrainian Government.

So, all newly loaned money will be going to Ukraine’s military.

These weapons will be sent to the southeast, in order to conquer the breakaway republics that reject the regime that was forced upon them on February 22nd, in an extremely violent coup against the then-existing President, Viktor Yanukovych, for whom the residents in that area had voted approximately 90%.

That rejection of the coup-regime sparked an on-again, off-again, invasion from the Ukrainian armed forces, which can be seen at various sites.

The official announcement of this ceremony said that the new weapons will “help Ukrainian warriors win and liberate the Ukrainian territories from the occupants.”

The election of President Poroshenko was held only in the areas of Ukraine that accepted the coup-imposed regime.

“The occupants” (as the President there referred to them) in the other area did not participate in that election, the election of him, though his Government demands they accept that Government as representing them, nonetheless.

After the new regime started dropping bombs on them, and sending tanks in to kill as many of them as fast as possible, their determination not to accept this Government only hardened.

The last Ukrainian Government election in which those people, “the occupants,” were voting, occurred in 2010, at which Viktor Yanukovych won above 80% in some districts, and above 90% in other districts.

Unknown said…
There are a number of countries that have guaranteed Ukrainian territorial integrity in exchange for Ukrainian nuclear weapons. The VERY LEAST that these countries could or should now do is provide weapons for Ukrainians to defend themselves - without cost. They would (in a small way) be fulfilling their commitments to Ukraine. Therefore, as regards these "loans" they ought never be repaid - just as U.S. lend lease to the USSR in WWII was never repaid. Call them loans or outright military support without strings attached - the results should be the same.

Those countries that have not pledged to support Ukraine's territorial integrity should, nevertheless be prepared to finance the price of military equipment (and other as well) because they are spared the much greater cost that may result from an aggressive Russia free to expand its imperial designs. Their freedom and security is being preserved at a very low cost.....Ukrainians are the ones who are bleeding and dying on both Ukraine's and Europe's defense and world stability. The tone and major points of your blog fail to recognize the much bigger picture. Giving Ukraine the weapons it needs (as well as financial support for the economy as a whole) is the best "ïnvestment" the world could make right now.
8:54 AM