December 26, 2014
KIEV, Ukraine -- Ukraine and pro-Russia rebels reported scant progress toward their goal of a cease-fire after the first high-level talks between the two sides in months. 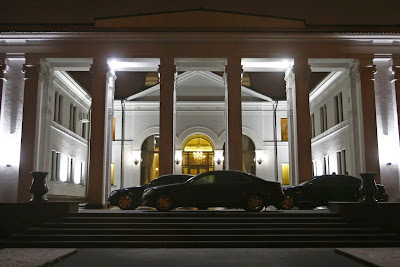 Limousines at the government building during negotiations to resolve the Ukrainian crisis in Minsk, Belarus, on Wednesday.

Meeting in the Belarus capital of Minsk, the delegates did agree to swap some prisoners.

The combatants said they hope to meet again in Minsk in the coming days to discuss broader measures to end fighting in eastern Ukraine that has killed at least 4,700 this year, —more than 1,300 of them since a putative cease-fire in September—according to a United Nations report.

The crucial goals of the talks, mediated by Russia and the Organization for Security and Cooperation in Europe, have been to cement a lasting cease-fire by agreeing on a withdrawal of heavy weaponry from the fighting zone and a demarcation line between rebels and government troops.

Officials declined to say Thursday what if any, progress was made on those points in the talks late Wednesday night.

“The meeting took a fairly long time, and the atmosphere was tense,” said Denis Pushilin, an envoy to the talks from the rebels’ self-proclaimed Donetsk People’s Republic.

“It was a preparatory meeting, and only after the next meeting would we be able to talk about the results.”

Ukraine military spokesman Col. Andriy Lysenko said that negotiations are continuing and that “they’re not being made public because there are no specific results just yet.”

The Ukrainian State Security Service said that a swap of prisoners might commence in days, although a spokeswoman for the agency said, “We hope that the deal won’t fall apart.”

The two sides will exchange several hundred prisoners, said Alexander Zakharchenko, the leader of the Donetsk People’s Republic, according to a report from the Russian news agency Interfax.

While a swap does mark some progress, officials said both sides would still be holding hundreds more prisoners, and a spokeswoman for the Ukraine Security Service repeated that it favored an “all-for-all” exchange.

The two sides said they hadn’t agreed on a date for the next meeting, but hoped it would be soon.

Though the truce announced in September has largely been a failure, an agreed-upon “day of silence” on Dec. 9 helped to reduce fighting, even though Kiev reported sporadic artillery fire.

The daily toll of casualties has slowed to a trickle recently, Col. Lysenko said at a briefing Thursday, with just one Ukrainian serviceman wounded in the previous 24 hours.

Meanwhile, friction persists between Kiev and Moscow over the Crimean peninsula annexed by Russia in March.

The peninsula, which relies on electricity from Ukraine, suffered a blackout for several hours Wednesday, after Ukraine shut down power from the mainland.

Ukraine’s energy minister said Ukraine’s electricity grid has suffered a deficit in recent weeks, and halted supplies to Crimea because it was using more than agreed upon.

Power delivery was back to normal in a few hours, he said.

Crimean authorities plan to charge Ukraine for the losses caused by the “surprise blackout,” according to a report from Russia’s Interfax news service.

Unknown said…
If Crimean officials plan to charge Ukraine for the "losses"caused by the several hours of blackout, Ukraine may want to look to Russia to compensate both Crimea (for its losses) and mainland Ukraine for its own additional losses.

Ukraine has been - for the last several weeks - desperately seeking the import of electricity and the acquisition of the specific type of coal that is used in Ukraine's electrical generating plants. For many years Ukraine had been using coal mined in the areas now controlled by Russia to power its plants. According to the OSCE that coal had been regularly shipped to (i.e. stolen by) Russia since the fighting began.

Consequently Ukraine has been forced to conduct numerous blackouts throughout Ukraine, including the capital itself. It would be senseless for Ukraine to supply foreign occupiers in Crimea or the Donbass with electricity while experiencing serious shortfalls of its own.....shortfalls due entirely to Russian unwillingness to pass on or even to sell the coal it had plundered from Ukrainian territory.

The Russians - within the last 24 hours - have now agreed to start sending some of these (plundered) shipments back to Ukraine. Hmmmm......I wonder if the prospect of a very dark and cold Crimea (including Russia's huge naval base in Sevastopol) and occupied Donbass may have had anything to do with this seemingly generous reconsideration?
9:13 PM