December 17, 2014
KIEV, Ukraine -- Ukraine passed two milestones this month. The first, promisingly, was the inauguration of a new government; a reformist, pro-European administration that aims to reverse the war-torn country’s fortunes, unlocking billions of dollars in international support. The second, depressingly, was being named the most corrupt country in Europe. 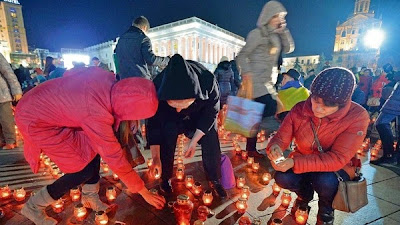 Thousands gather in Kiev’s Independence Square in November to mark the first anniversary of protests that toppled President Viktor Yanukovich.

The International Monetary Fund, which announced a $17bn rescue package for Kiev in April, now reckons $15bn more will be needed to shore up the government.

Support from the EU, the US and other donors is planned.

Western citizens ask: should we give our tax money to a corrupt country?

My answer is: yes they should. But they should be hard-headed about it.

The west should make its support dependent on corruption and oligarchy being brought to an end.

That would amplify the voices of those in Ukraine who insist on change.

Only together can they save our country.

It may seem strange for someone who is often identified in the west as an oligarch to call for an end to oligarchy.

But oligarchy is not the same thing as big business.

Oligarchy is when big business assumes the power to govern, or exerts influence on political power in opaque ways.

Western leaders are giving Ukraine the benefit of the doubt.

They ask for reforms but for now are content with declarations of goodwill.

Friends of Ukraine — diplomats and politicians and experts in America and the EU — say: “Don’t be too strict. The general direction is right.”

After the disappointment of the Orange revolution, western leaders are generous to extend their trust a second time.

Ukrainians have surely earned it, though, after shedding their blood for European values on Maidan Square in February, and shedding it now for freedom in the east.

And some in the new government and parliament come from the best parts of civil society and business.

However, this second chance is Ukraine’s last.

And we are in danger of squandering it because wheels within wheels are turning in the other direction.

Billions, still, are being taken out of the state budget.

Many politicians are in the pocket of oligarchs.

Still, people practised in the art of corruption hold senior positions in the ministries and in parliament.

And, while right-minded laws have been adopted, it is a Ukrainian tradition that the strictness of laws is in inverse proportion to the stringency with which they are enforced.

These practices put us all in danger.

They are not a part of Ukrainian folklore that our western friends should tolerate, while more important issues are resolved.

The EU is brutally strict with Greece, which takes 69th place on Transparency International’s ranking of government probity.

But Ukraine, placed 142nd, is indulged with talk of a path towards European integration.

Three forces are acting on Ukraine and its leadership.

Two of them — a critical mass of enlightened Ukrainians, and western partners — pull it ahead.

The other holds it back.

It consists of parts of Ukraine’s business, political and bureaucratic elites that have an interest in resisting change.

Nobody can reform an old order that still profits from it, as Machiavelli said.

The country’s leadership can and will take on the most ruthless and powerful actors only if a strategic alliance of western partners and the critical mass of Ukrainian society works together.

I have made my share of misjudgments, but in the early 2000s I understood business and politics must be separate.

I left politics, and see myself as a businessman for whom it is important to be a part of civil society.

Ten years ago I started investing to empower Ukrainian citizens to become agents of change.

Today the government and parliament includes more than a dozen alumni of the Aspen-Ukraine programme, which my foundation founded in 2006 and which has since become financially self-sufficient.

Alongside them are people who received scholarships to study abroad in exchange for a commitment to come back to Ukraine and apply their knowledge at home.

I am proud of this because it is transparent.

Their commitment is to our country, not to me. Ukrainian society has surprised the world, and me too, since November 2013.

I did not think it would grow so strong so soon.

I am sure we are ready for tough love.

(The author of this article, Victor Pinchuk, is a Ukrainian businessman and philanthropist.)