December 13, 2014
KIEV, Ukraine -- Ukraine must double its military budget next year to $3bn (£1.9bn) to fund the fight against pro-Russian rebels, the defence minister has said. 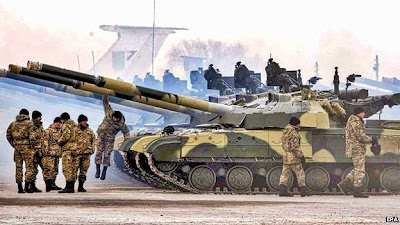 Ukraine says its military needs to buy equipment from the West in order to combat the heavily armed rebels.

He also said the armed forces would have to conscript more soldiers.

More than 4,300 people have been killed and almost a million displaced in the eight-month conflict between Ukrainian forces and pro-Russian rebels.

The rebels seized control of part of the eastern regions of Donetsk and Luhansk in April.

Ukraine and NATO countries have accused Russia of sending weapons and soldiers to aid the rebels - a charge Russia denies.

Mr Poltorak told parliament on Friday that the extra money was needed to buy better equipment for the military.

The number of soldiers serving in the east of the country would also have to be increased from 232,000 at present to 250,000 next year, he said.

He said the government planned to increase the number of conscripts as well as professional soldiers.

The annual budget is expected to be passed before the end of the year.

Ukraine has repeatedly asked Western countries to equip it with weapons to fight the separatist rebels.

However, NATO members have only pledged non-lethal military aid, amid concerns that shipments of heavy weapons could antagonise Russia.

On Thursday, Ukrainian Prime Minister Arseniy Yatsenyuk said his country would have to increase defence expenditure at the cost of slashing social payments.

He also called for an international donor conference to help Ukraine avoid defaulting on its debts.

The International Monetary Fund has warned that Ukraine faces a $15bn budget shortfall next year.

Meanwhile, a truce in eastern Ukraine appears to be holding.

President Petro Poroshenko said earlier that the past 24 hours were the first in which both sides had observed a ceasefire.

The warring sides signed a truce in Minsk in September, but more than 1,000 people have been killed in fighting since then, the UN says.

Ukraine crisis began a year ago, when then-President Viktor Yanukovych abandoned an agreement on closer trade ties with EU in favour of closer co-operation with Russia.

In the weeks that followed, Russia annexed Crimea, in Ukraine's south, and pro-Russian separatists took control of Donetsk and Luhansk, declaring independence.

The crisis has caused a serious rift between Russia and Ukraine's Western supporters.