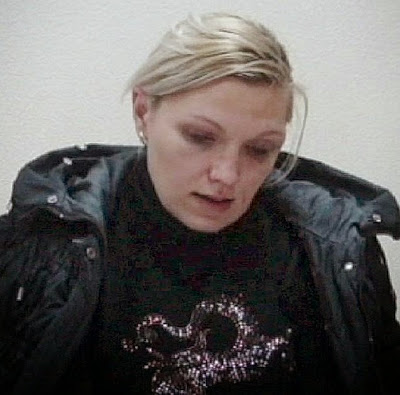 Ukrainian woman who was found with a bomb in her bag.

The alleged plot added to tensions between the West and Russia, which on Saturday threatened to retaliate for new sanctions and warned it would never give up the Crimean Peninsula it annexed from Ukraine.

Ukraine's counter intelligence agency claims a Ukrainian woman living in rebel-held Luhansk was found 800 kilometers away in Kiev with a bomb in her bag.

"The explosives were the equivalent of more than three kilograms of dynamite – equal to 30 grenades,” explained the agency's security advisor Markiyan Lubkivsky.

“Had a terrorist attack taken place in a crowded area, mass casualties would have been unavoidable."

Ukraine's security service has shown pictures of what it claimed was the explosive device and they said was her “confession video”.

In it a young woman can be seen referring to Russian, codenamed “Konstantin.”

“Konstantin gave me a bag containing something that would make the Ukrainian soldiers uncomfortable,” the woman said in the video.

“When I got on the bus I knew that there were explosives in that bag.”

Ukrainian authorities did not say how the woman was found.

Russia’s defence ministry did not yet comment, but the Kremlin has in the past denied involvement in the conflict in eastern Ukraine.

Yet, Russia did address new sanctions on Saturday, saying it was working on unspecified measures to retaliate.

The West imposed sanctions to punish Russia for its annexation of Ukraine's Crimean Peninsula and alleged military aid to pro-Russian separatists in eastern Ukraine in a conflict that has killed more than 4,700 people.

Moscow warned Saturday that it would wait as long as it takes for the United States and others to recognize what it views as Russia historic right to the Crimean peninsula.

Following earlier sanctions, American President Barack Obama announced Friday he had approved more restrictions on Crimea, while Canada announced travel bans for dozens of individuals as well as restrictions on the export of technology used in Russia's oil industry.

In a reaction, the Russian foreign ministry said it regrets that in its words "the United States and Canada still cannot get over the results of a free vote in Crimea in March."

That referendum was condemned by the West as illegal as it was seen as being held under the guns of Russian troops.

Moscow said however that the new sanctions will not push Russia to give up Crimea which it called the "historic and integral part of Russia".