December 08, 2014
MOSCOW, Russia -- Ukraine expects Russia to resume supplies of gas from Monday after Kiev transferred a pre-payment of $378 million to Gazprom, its energy minister said on Sunday. 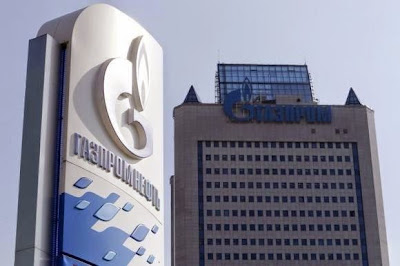 The company logo of Gazprom Neft is seen at a service station outside the headquarters of Gazprom in Moscow.

Russia cut gas deliveries to Ukraine in mid-June in a dispute over prices and debts and supplies have remained suspended while the haggling played out against a background of worsening political relations caused by the separatist war in Ukraine, which Kiev says Moscow is promoting.

Cash-strapped Kiev had delayed buying new supplies for as long as possible and had been drawing on severely depleted reserves to meet consumer demand as increasingly cold weather set in.

But with freezing temperatures and in line with a deal signed by Ukraine's gas company Naftogaz and Gazprom in October, Kiev late on Friday transferred $378 million to the Russian gas giant as an upfront payment for 1 billion cubic meters of gas for December.

Under the deal, the prepaid gas was to be delivered within 48 hours of payment.

"We have paid a sum for 1 billion cubic meters. From Monday we will start receiving."

Ukraine, a former Soviet republic, is one of the largest consumers of Russian gas with annual imports of around 30 billion cubic meters.

Russia also pumps around half of its gas exports through Ukrainian pipelines to prime markets in Europe.

At the end of October Ukraine and Russia signed an agreement brokered by the European Commission to cover gas supplies over the winter months as a temporary solution to the longstanding wrangle over prices.

Russia, whose relations with the former Soviet republic are politically complicated by its support for Ukraine's separatist rebellion, had insisted Kiev pay for supplies in advance.

Since the start of the heating season in late October Ukrainian gas reserves have fallen 17 percent to 13.9 billion cubic meters as of Dec. 1, according to data from Ukrtransgaz, the state-run gas transport monopoly.

Apart from the demands of big industries such as the steel sector, gas is also used by household consumers across the country to power central heating in homes.

Demchyshyn said on Sunday that the country was consuming more than 200 million cubic meters of gas a day, 55 million of which came from Ukraine's limited domestic production, 120 million from reserves and the rest from so-called "reverse flow" supplies from neighboring European Union countries.

Ukraine’s energy ministry has said Kiev might buy an additional 1.5 billion cubic meters of gas from Russia in the first quarter of next year following the December purchase.