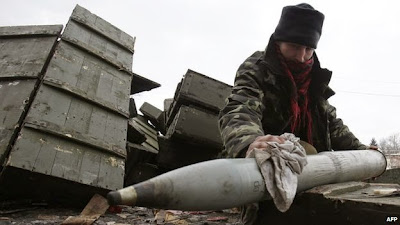 The "Day of Silence" is an attempt to kick-start the Minsk ceasefire deal.

Ukrainian President Petro Poroshenko had earlier called for a "Day of Silence", to make a widely-violated ceasefire deal stick.

New talks between the rebels and the government could take place in Belarus in the coming days.

Russia has resumed gas supplies to Ukraine after months of tough talks.

Russia cut off Ukraine's gas in June as the conflict between the government in Kiev and the rebels in the east escalated.

But a new gas deal was reached through EU mediation in October.

Ukraine and its Western allies accuse Russia of supplying heavy weapons and troops to the rebels - something Moscow has repeatedly denied.

The warring sides signed a truce in Minsk in September, but more than 1,000 people have been killed in fighting since then, the UN says.

Some of the heaviest fighting has raged at Donetsk airport.

The Ukrainian military said on Tuesday a ceasefire had begun in "all the positions of the anti-terrorist operation forces", Interfax Ukraine news agency reported.

The pro-Russian separatists had also laid down their arms at 09:00 (07:00 GMT) across eastern Ukraine, Russia's Ria Novosti agency said.

Mr Poroshenko said last week that troops would observe the Day of Silence on Tuesday to try to boost the peace deal.

Since the conflict began in April, more than 4,300 people have died with almost one million displaced, the UN says.

Russian Foreign Minister Sergei Lavrov says Kiev must not renege on a pledge to give "special status" to the rebel-held Donetsk and Luhansk areas in the east.

Speaking to Russia's RIA Novosti news agency, he said Mr Poroshenko had called for that status to be cancelled - a move that would "only strengthen the distrust between the sides, complicating their already difficult dialogue".

He also accused Kiev of blocking financial co-operation with the rebel-held areas.

Authorities in Minsk said they had not received any confirmation that either the Ukrainian government or rebel representatives would attend new peace talks, which were planned to begin on Tuesday.

Russian media reports say that the talks may now begin on Friday instead, but this has not been confirmed.

The previous Minsk agreement, brokered in September, projected a 30km (18 mile) military buffer zone in the east and limited self-rule for the separatists.

However, the rebels then held leadership elections on 2 November that Ukraine and the West refused to recognise.

There have been near-daily clashes and exchanges of heavy weapons fire, leaving hundreds dead.

Meanwhile, the last pieces of wreckage from Malaysia Airlines flight MH17, which was shot down over eastern Ukraine, have arrived in the Netherlands for investigation.

Ukraine and its allies have accused Russia of supplying the missile used to bring down the plane, while Russia has denied involvement.

A total of 298 people died when the plane came down in July.

The Ukraine crisis began a year ago, when then-President Viktor Yanukovych abandoned an agreement on closer trade ties with EU in favour of closer co-operation with Russia.

In the weeks that followed, Russia annexed Crimea, in Ukraine's south, and pro-Russian separatists took control of Donetsk and Luhansk, declaring independence.

The crisis has caused a serious rift between Russia and Ukraine's Western supporters.