December 20, 2014
RUKLA, Lithuania -- Maj. Linas Pakutka walked back and forth behind the line of soldiers lying in the snow-crusted field, a row of distant pines forming a jagged horizon in the twilight sky. 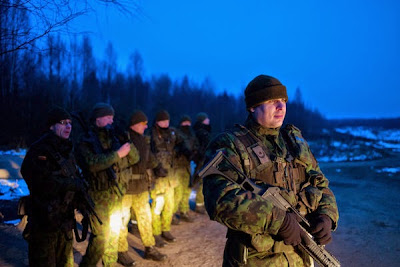 His command to fire was barely audible in the fierce wind.

The assault rifles, German-made G36s, crackled to life, punching invisible holes in a row of targets almost lost in the gloom.

“If something happens tomorrow, we are ready,” said Maj. Ernest Gaigalas as he watched the training exercise.

“If something really bad happens, we are good to go.”

It is the first of its kind along NATO’s eastern flank, intended to address exactly the kind of hybrid, insurgent warfare that has characterized the conflict in eastern Ukraine.

“One thing is clear now, we have to be ready,” said Brig. Gen. Vilmantas Tamosaitis, leader of the joint staff that commands the force from the Ministry of Defense in Vilnius, the capital.

“We have the same neighbors that Ukraine has.”

With a population of about three million and an active military of 8,000, Lithuania is unlikely to put up much of a fight against Russia, a neighbor whose military alone is more than a million strong.

But the conflict in Ukraine, which is also a former Soviet republic, has this Baltic nation’s attention.

At the NATO summit meeting in Wales in September, the alliance’s leaders — pushed by Lithuania, Poland and other eastern flank nations to take a more forceful stand against Russian aggression in Ukraine — opted to create a Very High Readiness Joint Task Force to be made up of troops from several NATO member nations.

“The idea is to have a capability that could react to developments on the ground in the Baltic States or Poland, or perhaps Romania, if you had something like the Ukraine scenario develop,” said Marcin Zaborowski, the director of the Polish Institute of International Affairs.

The first prototype unit in this new force, an “interim spearhead force” made up of 3,000 to 4,000 German, Dutch and Norwegian troops, will be operational by next year, NATO officials said this month, but a permanent force will not be up and running until at least 2016.

Lithuania, however, decided it could not wait that long.

“The situation in the region has changed,” General Tamosaitis said.

“And we need to counter these emerging threats, this new kind of hybrid war.”

Such conflict continues to simmer in eastern Ukraine, with Western leaders charging — and Moscow denying — that Russian troops are training, arming and fighting alongside local insurgents.

And Russia has been increasingly provocative in its use of military flights and naval operations in the Baltic Sea.

Last Friday, the Danish aviation authorities had to warn a Swedish passenger jet leaving Copenhagen to change course to avoid a Russian military aircraft flying with its transponder turned off.

Two days earlier, a plane flying out of Finland had a similar episode involving a Russian jet with its transponder off.

In October, the region was transfixed for more than a week by the search for a submarine, suspected of being from Russia, which witnesses claimed to have spotted near the Swedish coast.

In all, NATO officials said early this month, there had been more than 400 incidents this year in which alliance aircraft were scrambled to match the presence of Russian military jets.

“The Russians are testing what they can get away with,” Juozas Olekas, Lithuania’s defense minister, said in an interview.

“They’re testing how we react. They are exercising. They are demonstrating their power.”

The idea behind these rapid-reaction forces is that speed is essential in countering hybrid warfare threats.

Russia’s repeated use of massive military exercises near border regions, such as in Ukraine, puts its forces in a position to move into an area quickly, establish a foothold and even retract forces before conventional armies can react.

“We need to be able to deploy forces in hours, not weeks and months.”

Lithuania’s rapid-reaction force — made up of 2,500 military personnel, more than one-fourth of the country’s entire active force — went on duty Nov. 1.

The heart of it is Major Gaigalas’s mechanized battalion and Major Pakutka’s motorized battalion, each with 700 to 800 members; they are joined by logistical support, a special operations unit and even a small air contingent.

Lithuania is under no illusion that its 2,500-member force could hold off anything resembling a full-scale Russian incursion.

But if Moscow mounts a small, hybrid type of operation, General Tamosaitis said, the hope is that the force can hold the fort until the NATO cavalry arrives.

“We would go into action in the initial, self-defense phase,” the general said, “to buy some time until NATO can get here.”

This is why, he said, Lithuania is eager for NATO’s high-readiness force to hurry up and get ready — and, perhaps, Mr. Olekas added, for some of Lithuania’s neighbors along the alliance’s eastern flank to form national rapid-reaction forces of their own.

Lithuania is in a unique position among the Baltic States because its border with Russia is not in the east, toward the Russian heartland, but in the west, toward the small, Russian-controlled enclave of Kaliningrad, sandwiched between Lithuania and Poland.

By longstanding agreement, Russian military trains are allowed, with prior notice, to travel through Lithuania on their way to Kaliningrad, adding yet another avenue by which Russian forces could potentially be inserted into the country.

Unlike the other Baltic nations, Lithuania’s ethnic Russian population is small.

Protecting the interests of Ukraine’s large ethnic Russian population is one of the pretexts Moscow has used to justify its activities there.

“It is hardly possible to see a situation where Russian units could blend into the population in Lithuania,” General Tamosaitis said.

In the meantime, Lithuania plays host to a steady stream of forces from other alliance members for joint training exercises.

“In general, we are pleased that NATO is taking this seriously and will create this new force,” Mr. Olekas said.

“Many times we have been called Russia-phobians. But after Ukraine, after Crimea, people are starting to understand what we have been saying.”

Lithuania’s military, like those of other alliance members, has studied carefully the tactics used by separatist troops in eastern Ukraine and the actions that the Ukrainian military has taken to combat them.

The first task, General Tamosaitis said, is to figure out whether you are dealing with a domestic, criminal uprising or a foreign incursion.

He said that involves understanding the tactics and the weapons being used.

Major Pakutka walked through the glare of a headlight parked on the gravel road overlooking the training field where the dark silhouettes of his men moved noiselessly, his boots crunching in the frozen tire tracks.

Part of their training, he said, has been exercises in which his troops pretended to be “little green men,” as the military forces without insignia are called colloquially.

“When you need bad guys, you call them,” Major Gaigalas said, smiling.

Does either of them really think that there will be an incursion by Russian forces in Lithuania?

“We have to be ready for the worst. All I know is that if something happens, we are ready.”