December 16, 2014
KIEV, Ukraine -- Ukraine’s prime minister on Monday called for more NATO support to reform its military as the country’s crisis with Russia has given new life to a once abandoned effort to eventually join the U.S.-led alliance. 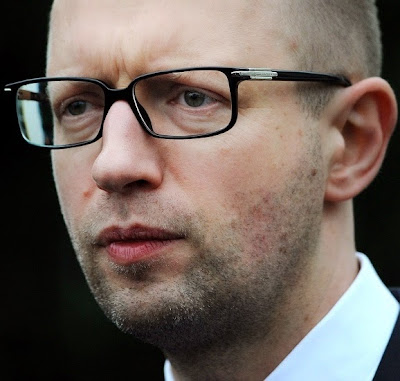 “I do remember nine months ago when we said NATO membership is not yet on our radars,” Ukrainian Prime Minister Arseniy Yatsenyuk said during a news conference at NATO headquarters in Brussels.

“I will tell you the screen of this radar has entirely changed.”

The presence of Russian tanks, howitzers and soldiers in eastern Ukraine, where pro-Russian separatists have been battling Ukrainian forces, has changed the security equation in the country, Yatsenyuk said.

Russia has denied sending troops or weapons to the separatists.

However, Yatsenyuk acknowledged the path toward NATO membership — for which the alliance sets a series of benchmarks that can take years to implement — could be a long one.

“We need to pass reforms and implement reforms that are needed… to meet all standards and criteria that apply to all NATO states,” he said.

“This is the roadmap and we will follow this roadmap.”

Any decision on further NATO expansion also requires unanimous support of all 28 members.

In the past, Germany and several other countries have expressed opposition to accepting new members from the former Soviet Union, which Russia still regards as part of its sphere of influence.

“We need to modernize and overhaul [the] Ukrainian military.”

In the past week, officials in Poland and Sweden have both complained of a surge in Russian military activity near NATO airspace.

On Friday, Sweden claimed that Russian military intelligence aircraft nearly collided with a civilian aircraft in international air space, forcing the passenger plane to reroute during a flight south of Sweden.

Russia denied those and other allegations of Russian planes repeatedly flying unannounced into international airspace with tracking sensors turned off — a violation of international air traffic rules.

“I would like to underline all NATO planes are conducting flights in compliance with international safety standards,” he said.

In November, NATO officials reported that Russia had sent combat troops into eastern Ukraine, as well as artillery and air defense systems, which some experts have said could be aimed at eventually building a land corridor between the Russian mainland and the Crimea Peninsula, which Russia seized from Ukraine in March.

Stoltenberg called on Russia to live up to a cease-fire deal that calls for an end to hostilities, but has gone largely ignored inside Ukraine.

“Ukraine has made real efforts to live up to those agreements and we call on Russia to do the same.”

As violence between the Ukrainian military and Russian-backed separatists continues, pressure also is mounting on the Obama administration to intensify its support for Ukraine, which so far has been limited to nonlethal aid.

Last week, U.S. lawmakers approved legislation that authorizes but does not require the White House to send arms to Ukraine, something that political leaders in Kiev have long sought.

It remains unclear whether President Barack Obama will take the next step and send weapons into the country.

Any decision to send in lethal aid is a bilateral decision and not a matter for NATO consideration, Stoltenberg said.