December 18, 2014
DZERZHINSK, Ukraine -- It was mid-morning when the bombs began to fall on Artyomove, a crumbling mining town on the frontline in eastern Ukraine. 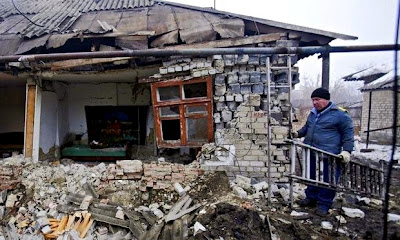 Damaged caused by pro-Russia rebel mortars in the town of Avdiivka in Ukraine's eastern Donbass region.

It flattened her fence.

Another hit next door, gouging a large raw hole in a black plot of vegetables and rose bushes.

“I saw it fly through the air,” she said, showing off the remains - a silvery tail-fin.

The mortar was fired from the nearby city of Horlovka.

In the spring, pro-Russia separatists seized a series of administrative buildings across Ukraine’s Donbass region, including in Dzerzhinsk, next door to Artyomove.

In July, the separatists retreated, but they still occupy the two major cities of Donetsk and Luhansk and a chunk of territory next to the Russian border.

Dmitrievena’s micro-district – an ensemble of dachas, plus a school - is now in the buffer zone between the Ukrainian army and the self-declared Donetsk People’s Republic (DNR).

Many expected a fresh rebel advance, but for now Dzerzhinsk is under Kiev’s control.

Earlier this month both sides agreed a ceasefire.

So far it is holding.

This lull after seven months of fighting appears to mark a retooling of the Kremlin’s strategy.

In March, the Russian president, Vladimir Putin, annexed Crimea, and he gave political and military support to the east’s anti-Kiev rebellion.

His goal was to create Novorossiya, a historically fictitious pseudo-state encompassing Ukraine’s eight Russian-speaking southern and eastern oblasts, or regions, all the way up to Moldova.

Despite Kremlin encouragement, however, the cities of Kharkiv in the east and Odessa in the south failed to rise up.

In late August Putin sent in the regular Russian army to choke off a Ukrainian offensive, though Moscow denies its forces entered Ukraine.

The war has wrecked Donbass’s economy and infrastructure.

With the rouble in freefall, western sanctions hurting and winter near, Moscow has concluded that the bill for its Novorossiya project is too big.

Citing Kremlin sources, the opposition paper Novaya Gazeta reported that the Donetsk and Luhansk People’s Republics would not become independent after all.

Nor would they join Russia.

Novorossiya has been mothballed.

Instead, Moscow wants the eastern regions to return to Ukraine under a new federal structure that would allow Moscow to call the shots.

The Kremlin has recently shuffled out Novorossiya’s three most prominent leaders:

“Putin doesn’t need Donbass. Everything round here has fallen down,” Dmitrievna said.

“If he wanted us he would have arrived by now. He has his own problems. The rouble is sinking.”

She said she had not voted in May when the separatists held a breakaway “referendum”, but that she didn’t think much of Petro Poroshenko’s new government in Kiev either.

“Poroshenko never went to Donetsk. If he’s the president he should listen,” she said.

Her neighbour Pyotr Sergeyevich complained that pensioners did not have the option of fleeing.

He stared glumly at a hole left by a mortar.

“I’m 67 years old. I spent 37 years down the mines. Where am I supposed to go? Nobody wants us. Europe doesn’t want us. Russia doesn’t. New York doesn’t.”

Artyomove’s Gagarin mine, named after the famous cosmonaut, shut down in the 1990s.

Three mines in Dzerzhinsk are still operational, at least for now.

The town, which has a population of 35,000, is named after Felix Dzerzhinsky, Lenin’s secret police boss.

Bombing has gone on for three months.

A notice advises residents where to find the nearest shelter.

It urges them to tape up windows, stock up on food and medicines and warn those living next door.

Six victims of the latest shelling were in hospital.

One of them, Vera Ivanovna, said she had been fetching water from the well in her village of Mayorske on 8 December, a day before the ceasefire, when she heard a sudden whistling.

“I threw myself under a fence. There were five or six explosions, the last one three metres away. There was a huge wave. It threw me up in the air and flipped me over.”

She suffered shrapnel wounds to her legs, stomach, and hand, and is unable to hear with her right ear.

The rebels were aiming for a nearby Ukrainian army post, but they missed.

With the war being fought in civilian areas such casualties were inevitable, said Yevgeny Zhuk, the hospital’s trauma surgeon.

“We get wounded civilians, soldiers and children. This brings nobody joy.”

Five people from Dzerzhinsk had been killed so far, one a soldier, he said.

Another doctor, Tatiana Plisenko, said the war had also taken a devastating psychological toll, with patients complaining of depression and anxiety.

The hospital’s windows shook during shelling.

Who was to blame for this mess?

“Moscow, Kiev, Brussels, London. We had peace for 23 years [since Ukraine’s independence]. And now we have war.”

If life in Dzerzhinsk is grim, nine miles away in DNR-controlled Horlovka it is dramatically worse.

On a checkpoint sign into town someone has written:

According to one local, Maxim, who he declined to give his surname, there are no jobs and no proper banks.

He said the separatists had forced teachers and doctors to carry on working to give the impression that life was OK, but that they were acting out a role for Russian TV.

No one actually got paid anything, he said.

The rebels have proved incapable of providing basic services.

In smaller towns, especially among pensioners, there were signs of famine, Maxim said.

“Opinion is divided, but the number who enthusiastically support the DNR has dwindled.”

Maxim, who works in Donetsk, said the situation there was brighter.

Inhabitants fled the fighting in August, but most have since come back.

They had survived better because they have greater financial resources.

Maxim said the rebels were currently regrouping, and predicted they would launch a major offensive in the spring.

Ukrainian TV had been switched off, he said.

“The DNR wants to take the whole of Donetsk territory. It will carry on [fighting] until someone in the Kremlin says stop,” he said.

“The DNR and LNR can’t exist as independent entities.”

Eastern Ukraine has two rival capitals – a rebel one in Donetsk, and a provisional one in Kramatorsk, a Soviet-era town known for its three machine-building factories.

Ukrainian forces recaptured Kramatorsk in July, when the rebels withdrew from their previous stronghold in nearby Slavyansk.

KIt is the nerve centre of what Kiev calls its anti-terrorist operation.

Drive past any Ukrainian checkpoint and you come across the slogan “Putin is a shit”.

The troops have customised their uniforms with insignia showing the herb dill, a nod to Russians’ nicknaming Ukrainians dill-heads.

Ukrop in Russian is similar to Ukraine.

The Ukrainians call the rebels vatniki, or quilted jackets.

Since the war began at least 1,250 Ukrainian soldiers have been killed, 192 of them since the ceasefire deal was agreed, but not implemented, in September.

Some observers believe Putin has already achieved his strategic aims.

He has Crimea and a new frozen conflict in the east.

Moscow can use Donbas to sabotage the pro-western government in Kiev, bogging it down in a disastrous on-off war.

The economy is perilously close to default, and Ukraine is still dependent on Russian gas.

Others, however, believe the Russian president may have over-reached himself.

Olexiy Haran, a politics professor at Kiev-Mohyla academy, said the Kremlin’s original objective was to control the whole of Ukraine.

Instead, it ended up with a small eastern chunk, just 2% of the country overall.

Haran said Kiev now had to decide whether to cut these occupied territories free, or to try win them back.

For the moment it is doing both, supplying electricity and water to rebel towns, but not social benefits.

Back at Artymove a group of children at school number 13 play a game of after-hours ping pong.

When the bombardment started earlier this month they spent half the day sitting in the basement.

“The windows started shaking. The teachers told us to get our coats and to go into the shelter,” 12-year-old Nikita said.

How did he pass the time?