Ukraine Army Under Fire Amid Preparations For Rebel Truce

December 07, 2014
KIEV, Ukraine -- Ukraine said it reached an agreement with pro-Russian rebels to resume peace talks next week while troops remained under attack and extra equipment and tanks entered the conflict zone in the nation’s east. 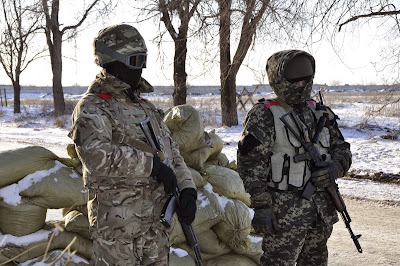 Ukrainian soldiers guard one of many checkpoints in Ukrainian town Mariupol, eastern Ukraine on December 4, 2014.

Two columns with about 120 military vehicles crossed the border with Russia in the past 24 hours, Defense Ministry spokesman Volodymyr Polevyi said in Kiev today.

Rebels also shelled troops four times near Mariupol this morning from multiple rocket launchers and mortars, according to the government.

The months-long unrest has prompted the worst standoff between Russia and the U.S. and the European Union since the Cold War.

Putin, who denies any involvement, met with French President Francois Hollande in Moscow today and said a cease-fire will hopefully be reached soon.

Ukraine President Petro Poroshenko said there is a “preliminary” agreement to resume peace talks in Minsk, Belarus, on Dec. 9, which is also eyed as a day of artillery silence in a deal reached yesterday with representatives from Russia, rebels and the Organization for Security and Cooperation in Europe.

Denis Pushilin, permanent representative for truce talks from the self-proclaimed Donetsk People’s Republic, proposed Dec. 12 as a date for negotiations.

The government said today that 93 civilians have been killed since a truce approved in September, a count that excludes additional casualties in rebel-held areas.

More than 4,300 people have died in the conflict, according to a “conservative” United Nations estimate.

So far 1,250 Ukrainian soldiers have been killed in the conflict, Poroshenko said while visiting front-line soldiers today.

The new Ukrainian government of Premier Arseniy Yatsenyuk, approved by lawmakers this week, needs to adopt a 2015 budget and tax laws complying with International Monetary Fund requirements to qualify for the next $2.8 billion disbursement of its bailout package.

Ukraine needs the cash, part of a $17 billion loan program, to repay debt, buy heating fuel for winter and stem the hryvnia’s slump of about 46 percent this year.

Ukraine’s bonds have lost the most this quarter after Venezuela among 58 nations in the Bloomberg USD Emerging Market Sovereign Bond Index. (BEMS)

The benchmark note due July 2017 fell yesterday, sending the yield to an all-time high.

The hryvnia depreciated 0.7 percent against the dollar.

Ukraine’s foreign reserves shrank to $10 billion, the central bank said yesterday after it dipped into its cash to pay off Russian energy debt.

Inflation in November quickened to 21.8 percent from a year earlier, the fastest since January 2009, compared with 19.8 percent in October.