December 27, 2014
DONETSK, Ukraine -- The Ukrainian government and separatists from the country’s southeast on Friday began swapping hundreds of prisoners of war in a rare sign of cooperation between the two sides. 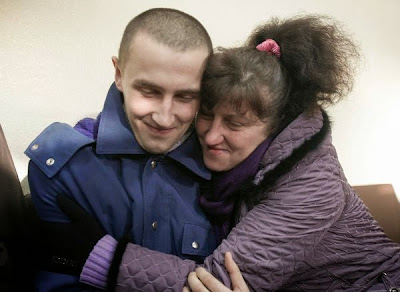 A Ukrainian mother greeting her son, freed on Friday by pro-Russian rebels who control the eastern city of Luhansk.

The prisoner exchange, which was reported by the Interfax news service late Friday afternoon, came during a period of diplomatic stagnation, as peace talks that involved Russia and the Organization for Security and Cooperation in Europe broke down in Minsk, Belarus.

The suspension of the peace talks, the first to be held since September, was announced by Belarussian officials, who have hosted negotiations to end the nine-month conflict, which has taken more than 4,700 lives.

Dmitry Mironchik, a spokesman for the Belarussian Foreign Ministry, confirmed by telephone that talks were not held on Friday but did not give a reason.

He said Minsk would remain open to hosting talks “even if they take place on New Year’s Eve.”

As the talks broke down, Ukraine also announced that it would cut both passenger and cargo rail services to the Crimean Peninsula, which was annexed by Russia in March.

Ukrainian Railways, the state-run train service, said it was canceling service to the peninsula for “passenger safety.”

The decision further isolates the peninsula, which is dependent on Ukraine for deliveries of utilities, including energy.

Without rail service, Crimea remains open only to automobiles and to an overextended ferry service at the port city of Kerch.

Negotiations seeking an end to the conflict in southeast Ukraine had been expected to continue on Friday, but expectations for a breakthrough were low.

A cease-fire signed in September has produced a moderate reduction in the fighting, but a political solution has remained elusive.

The only concrete result from talks held on Wednesday appeared to be the prisoner exchange, the largest to date, which was one of the steps outlined in a peace plan written by President Petro O. Poroshenko of Ukraine in June.

Leonid Kuchma, the former president of Ukraine appointed to represent the country in the talks, confirmed the prisoner exchange to the Ukraine Interfax News Service on Friday and said that the “the list of names has been approved and signed by both sides.”

The list included 225 separatists held by the Ukrainian side and 150 servicemen held by the rebels, and the exchange may be concluded by the end of this year, the agency reported.

Late Friday afternoon, both the Russian and the Ukrainian state news media announced that the prisoner exchange was underway.

Previous prisoner exchanges have been plagued by bait-and-switch accusations and charges of poor treatment of prisoners by both sides.

Ukraine also cut power service to Crimea on Friday for the second time in less than a week.

In a separate development, Visa announced that it would cease servicing payments in Crimea because of sanctions imposed by the United States last week in connection with the peninsula’s annexation.