December 08, 2014
KIEV, Ukraine -- Ukraine said rebel attacks dropped off in the eastern part of the country, while the two sides neared an agreement to resume peace talks as soon as this week. 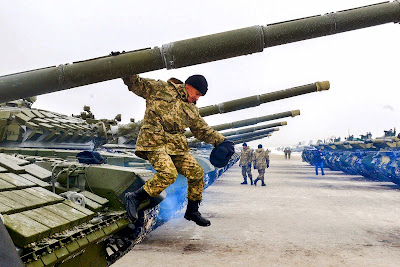 A Ukrainian serviceman jumps off a tank after a ceremony with the Ukrainain president for the delivery of more than 100 pieces military equipment, including armoured vehicles, to the Ukrainian armed forces, near northeastern Ukrainian city of Chuhuiv, Kharkiv region, on December 6, 2014.

The Defense Ministry said pro-Russia separatists had shelled government forces about 33 times as of 6 p.m. local time yesterday, down from 58 in the same period the day before.

“The overall activity of the rebels has fallen along the whole length of the front line compared to yesterday,” the ministry said.

“Activites to strengthen fortifications are under way.”

The months-long unrest has prompted the worst standoff between Russia and the U.S. and the European Union since the Cold War.

Earlier yesterday the Defense Ministry in Kiev said the number of insurgent attacks had almost doubled in the previous 24 hours.

Two Ukrainian soldiers were killed and eight wounded in the last 24 hours, Lysenko said yesterday, while shelling continued near the southern city of Mariupol along the Sea of Azov.

Ukrainian President Petro Poroshenko said there is a “preliminary” agreement to resume peace talks in Minsk, Belarus, on Dec. 9.

This is also planned as a day of artillery silence in a deal reached Dec. 5 with representatives from Russia, rebels and the Organization for Security and Cooperation in Europe.

“We insist on holding talks no earlier than Dec. 12.”

He said a “multitude of questions” still needs to be worked out before negotiations can start, according to IFX.

The OSCE said on its website the report was based on information received as of the evening of Dec. 5.

Ukraine’s Defense Ministry reported that about 120 military vehicles had crossed from Russia into rebel-held territories of Ukraine.

More than 4,300 people have died in the Ukraine conflict, according to a United Nations estimate.

The new Ukrainian government of Premier Arseniy Yatsenyuk needs to adopt a 2015 budget and tax laws complying with International Monetary Fund requirements to qualify for the next $2.8 billion disbursement of its bailout package.

Ukraine needs the cash, part of a $17 billion loan program, to repay debt, buy heating fuel for winter and stem the hryvnia’s slump of about 46 percent this year.