December 23, 2014
KIEV, Ukraine -- Kazakhstan, one of the principal allies of Russia, renewed Monday its military cooperation with Ukraine, to which it promised vital supplies of coal, following a visit to Kiev the day before by the leader of Belarus, Alexander Lukashenko. 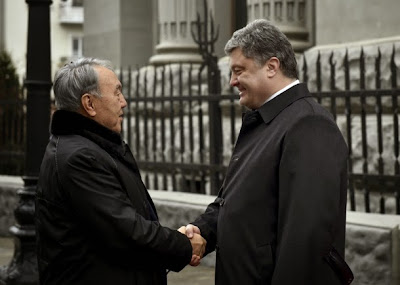 "We will fully renew our military cooperation," Ukrainian President Petro Poroshenko told the press after meeting in Kiev with his Kazakh colleague, Nursultan Nazarbayev.

Poroshenko said that this is not a case of Ukraine importing arms to combat pro-Russian separatists, but will rather help the central Asian republic of Kazakhstan strengthen its national defense.

In exchange, Nazarbayev announced an agreement to export coal to Ukraine, which has serious supply problems since most of its own coal mines are under the control of pro-Russian separatists in the Donetsk and Luhansk regions.

On a political level, Nazarbayev expressed during the meeting with his Ukrainian colleague his willingness to mediate the conflict in eastern Ukraine and said that the path of confrontation "is a road to nowhere."

"I ask Russia and Ukraine to think about finding a compromise to end the crisis and to maintain Ukraine's territorial integrity, since the situation in Donbass (eastern Ukraine) is senseless," he said.

He said Ukraine could and should restore trade relations with Russia, "its main partner," but noted that "Ukraine is close to Europe," so that signing a Pact of Association with the EU "is perfectly understandable," the exact opposite of the Kremlin's view.

Immediately afterwards on Monday, the Kremlin announced that President Vladimir Putin would discuss that same afternoon the pacification of Ukraine with the Kazakh leader.

Ever since the Ukrainian crisis broke out, Nazarbayev has defended the territorial integrity and independence of Ukraine and, despite Russia's annexation of Crimea and the independence movement of pro-Russian rebels, has criticized separatism.

That was also the position of Lukashenko, who on Sunday made a lightning visit to Kiev, where he told Poroshenko of his intention to reinforce cooperation in all fields and urged the quickest possible renewal of negotiations in Minsk, Belarus, with the pro-Russian separatists.

Both Kazakhs and Belarusians have always kept their distance from Russia's active interference in Ukraine, which has cost Moscow heavy international economic sanctions.

"Nazarbayev offers to mediate. Lukashenko is already a mediator, since he offered his country's territory for the negotiations...these countries want to distance themselves from Russia in favor of neutrality," Russian political scientist Alexei Makarkin told the Interfax news agency.