The Russians Say They Are Fighting A 'Holy War' In Ukraine

December 18, 2014
DONETSK, Ukraine -- Even when the morning sun catches the gold domes of its Orthodox churches, the Ukrainian city of Donetsk, stronghold of the pro-Russian rebels, doesn't look much like Jerusalem. 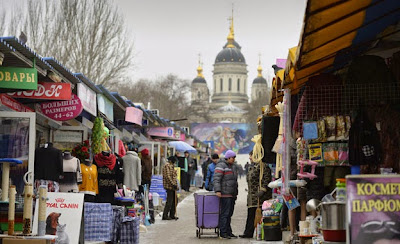 Since the start of the conflict in eastern Ukraine eight months ago, the Kremlin has denied any direct involvement, including sending Russian troops. But there are Russian fighters on the ground who are proud to announce their presence - and to discuss their ideas of "holy war".

Trolley-buses trundle through the dirty snow, past belching chimneys and the slag-heaps from the coal-mines on the edge of town.

But through the smoke and grime, Pavel Rasta sees a sacred city - and he's fighting for it, Kalashnikov in hand, just like the Crusaders fought for the heart of Christendom centuries ago.

He may be a financial manager - most recently working in a funeral parlour - who's never held a gun before in his life, but he sees himself as the modern version of a medieval knight, dedicated to chivalrous ideas of Christian purity and defending the defenceless.

And the defenceless, for him, are the citizens of eastern Ukraine, mainly Russian-speaking, who are under attack, as he sees it, by a ruthless Ukrainian government intent on wiping them out culturally, or even physically.

Pavel, from the southern Russian city of Rostov-on-Don - a tall man in his late 30s with a fashionably trimmed beard and a bookish air - is just one of hundreds, perhaps as many as 1,000, Russian volunteers fighting in Ukraine.

The conflict around the self-proclaimed separatist republics of Donetsk and Luhansk has now dragged on for eight months - with at least 4,700 killed, even by the most conservative, UN, estimate.

Despite Kremlin denials, evidence from intelligence sources, and Russian human rights groups, suggests thousands of regular Russian troops have also been fighting there, alongside a larger number of local rebels.

But men like Pavel say they aren't there under orders, or for money, but only for an idea, the idea of restoring a Russian empire.

It would be Orthodox, like the empire of the tsars, including Ukraine and Belarus.

"Why do I say Donetsk is Jerusalem? Because what's happening here is a holy war of the Russian people for its own future, for its own ideals, for its children and its great country that 25 years ago was divided into pieces," Pavel says.

We're sitting on his narrow, squeaky bed in a barracks in Donetsk, our conversation interrupted periodically by the boom of shelling and the crackle of gunfire.

Like the other Russians here, he says he's paid for much of his equipment and travel arrangements himself.

Some kit and food comes from donations channelled through Russian nationalist organisations, while their weapons - in this unit, mostly rifles - are from the rebel military authorities, originally captured from Ukrainian forces or supplied by Russia.

No Western journalist has been allowed to meet the volunteers before - revealing any Russian involvement in the war is sensitive - and a few of his comrades in this unit of Russian and Ukrainian volunteers are nervous about our presence.

They're a mixed bunch: some are retired professional soldiers hardened by Russia's wars against the Chechen rebels, some former policemen - and possibly, secret service agents - who later went into business, some youngsters who've never even served in the army.

And their cultural reference-points are bewilderingly eclectic.

The image of Orthodox Crusaders sits uneasily with the emblem of the brigade they serve in - a skull-and-crossbones - and their motto:

"The more enemies - the more honour."

Some are clearly driven partly by an existentialist quest to give meaning to their lives - it's no surprise to find Pavel's most recent reading is Albert Camus and Jean-Paul Sartre.

But what seems to unite most of them is a belief that they're in Ukraine not to support a rebellion against the legitimate government there, but rather to defend Russia itself against sinister Western forces that want its total destruction.

"The Ukrainian authorities aren't responsible for starting this war," says a young volunteer from the outskirts of Moscow who wants to be known only by his military nickname Chernomor (Black Sea).

"It's Britain, Europe and the West."

He's a trained lawyer who served in the Interior Ministry forces, partly in Chechnya, and now he's left his new wife and baby son to fight, he says, for "freedom".

That means freedom, in the first instance, for the Russian nation.

"Our efforts are saving the Russian state," he says.

"Because if the war for Donetsk is lost, it will immediately cross the border and begin in Russia. Rostov, Moscow, Vladivostok will be in flames."

But the idea that Russia - and the wider Orthodox, Slav world - are surrounded by steadily encroaching enemies has been a powerful current in Russian thought for at least 200 years.

And the tradition of volunteers travelling to defend it also goes back a long way.

In the late Nineteenth Century there were many real-life equivalents of Count Vronsky, the lover of Tolstoy's Anna Karenina, who signs up after her suicide to protect fellow Slavs against the Turks in Serbia, and dies in the struggle.

In the 1990s Russian volunteers - including some now fighting in Ukraine - took the same road, joining the Orthodox Serbs against the Catholic Croats and Bosnian Muslims in the Yugoslav wars.

How do Russia's rulers regard such volunteers?

Certainly, there's a complex interplay between nationalist groups and the authorities.

The nationalists share the Kremlin's distaste for Western liberal values and its love of strong central authority.

But many are ultimately monarchists who dream of turning the clock back to before the 1917 revolution.

"God, Tsar, Nation" is their slogan - and a president who was once an agent of the hated Communist secret police is distinctly second-best.

Putin has borrowed some of their religious imagery: in his annual address to the Russian parliament, which I see him deliver on a fuzzy TV in Pavel's barracks, he too uses the Jerusalem comparison.

But he's not talking about Donetsk, only about Crimea, annexed by Russia earlier this year.

In this speech, he stresses Ukraine's right to determine its own path - unlike Pavel, who says simply that there should be no Ukrainian state.

So are the volunteers loose cannons who could potentially embarrass the Kremlin?

Or are they simply useful tools of a policy that can be officially denied?

In April a force led by Russian volunteers under the shadowy former intelligence agent Igor Strelkov - another monarchist - seized the strategic town of Slavyansk, north of Donetsk, effectively sparking the war.

In recent interviews, Strelkov has said he takes full responsibility on himself.

But he's now back in Moscow.

And other Russian citizens who played a prominent role in the formation of the separatist republics have also now left Ukraine, at least partly it seems under pressure from Moscow.

Their role there no longer suited the Kremlin's purpose.

Moscow could easily - if it chose - prevent rank-and-file volunteers like Pavel travelling to Ukraine.

But for now it chooses not to hinder them.

It interferes neither with the nationalist websites that recruit volunteers, or with their paramilitary training camps - like one I visited on the outskirts of St Petersburg which trains them in the handling of firearms, survival techniques, battlefield first-aid and basic discipline.

Perhaps, secretly, it even encourages such activities.

What's certainly true is that with their ideological zeal, the volunteers are playing their part in prolonging the war - and they believe it will rumble on for a long time.

I ask Pavel, over supper, whether his friends don't think he's crazy - doesn't he ever feel like giving up and going home?

And that, in his fantasy, means fighting all the way to the westernmost boundaries of Ukraine - creating a new Russian empire.