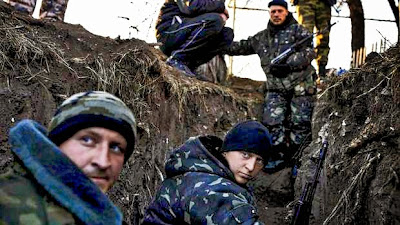 Pro-Russian separatists sit in a trench at a check point near the village of Frunze, eastern Ukraine.

Protests as Russia signs a treaty that critics call a de facto annexation of a breakaway region.

This time it’s happening not in Ukraine but elsewhere in Eastern Europe and the former Soviet Union.

The chill of a new Cold War is advancing – in Moldova, Georgia and beyond.

Moldova’s parliamentary election on Sunday was already going to be a wild affair even before the main pro-Russian party, called Patria, was banned from the vote after a court ruled it was funded by a foreign source.

Patria’s leader, Renato Usatii, added to the drama Friday when he fled the country, saying he feared arrest.

Separately, police said they discovered guns, grenade launchers and military uniforms in a raid this week that targeted 15 unnamed Russian and Moldovan suspects.

The country is now dangerously on edge.

Patria had about 12-per-cent support before it was disqualified, and much of that is expected to go to the two remaining pro-Russian parties.

Both say the country would be better off economically if it leaves the complicated road to membership in the European Union in favour of joining the Moscow-led Eurasian Union, which launches in January.

It’s the same argument Ukraine was having last year, just before the country descended into revolution and civil war.

Throw into the mix Trans-Dniester, a region in eastern Moldova that has been under the control of Russian-backed separatists since 1990, and the southern region of Gagauzia – which earlier this year held an unrecognized referendum in which residents overwhelmingly supported joining the Eurasian Union – and you can see why many worry Ukraine’s troubles are about to spill over.

“Right now, it’s very hard to predict what will happen,” said Doru Petruti of the Institute for Marketing and Polling in Chisinau.

“Some people are afraid something might happen after the election.”

Abkhazia is a small, largely forgotten chunk of land on the Black Sea that has had de facto independence since 1993, when Russian-backed separatists drove out Georgia’s national army.

Little changed there until 2008, when Moscow recognized Abkhazia as an independent state following a short war between Russia and Georgia over South Ossetia, another mini-state supported by Moscow.

Last week, Russia upped the ante again by signing a treaty that will see Russia and Abkhazia merge their foreign and defence policies, including the creation of a joint army to defend Abkhazia’s border with Georgia.

In the eyes of many Georgians, that’s not too different from what Moscow did when it annexed the Crimean Peninsula from Ukraine earlier this year.

“Putin wants to make sure that no country in the region, like Ukraine, Georgia or Moldova, will ever be able to join any Western institutions like the EU or NATO,” said Mamuka Kudava, a former Georgian ambassador to France, referring to Russian President Vladimir Putin.

“I think the Cold War never finished in our region.”

Countries like the United States and Canada that have taken a hawkish line in confronting the Kremlin since the Ukraine crisis began have long worried that their European allies – particularly Germany and France – won’t have the stomach for a prolonged confrontation with Moscow.

Western sanctions are starting to bite the Russian economy – helped along by the tumbling oil price, since Russia relies heavily on energy exports – but the European economy is also slowing toward stagnation, leading some in the EU to question whether continuing sanctions against Russia were in their own countries’ interests.

France’s ongoing preparations to transfer two Mistral helicopter carrier warships to Russia – a $1.7-billion deal – were seen as a bellwether for European commitment to facing down Moscow.

Despite the annexation of Crimea and Russian support for separatists in eastern Ukraine, Russian sailors are still in the French port at Saint-Nazaire, training aboard the first of the warships (which is now ready to sail) and preparing to take possession as soon as the French government gives the go-ahead.

The sailors may be in limbo quite a while longer.

French President François Hollande announced last week that the transfer of the warships is indefinitely postponed because of the “current situation in eastern Ukraine.”

Russia is now threatening to sue France for more than $4-billion.

Since the outbreak of fighting in Ukraine, the tiny Baltic states have worried loudly that they might be next in drawing the attention of a revanchist Kremlin.

While analysts in Moscow dismiss that worry as alarmist, Russia’s relations with its former colonies Estonia, Latvia and Lithuania have worsened dramatically in recent months.

All three countries, now members of the NATO alliance, report dozens of incursions or near-incursions into their airspace this year, while neighbouring Sweden staged a prolonged hunt for a suspected Russian submarine in the waters off Stockholm last month.

The latest development is Lithuania’s claim last week that Russia had closed its borders to all trucks with Lithuanian licence plates.

Meanwhile, the U.S. announced that several hundred troops “temporarily” deployed to Poland and the Baltic countries would remain in their new bases through 2015.

Hopes that the situation in eastern Ukraine would stabilize following a September ceasefire deal have crumbled, as daily fighting has continued between the Ukrainian army and the Russian-backed separatists in the Donetsk and Lugansk regions.

Ukrainian President Petro Poroshenko signalled he may have given up on the ceasefire when he told the country’s newly elected government that he wants to hold a referendum on whether the country should seek membership in NATO.

“It is clear that the non-aligned status of Ukraine proclaimed in 2010 couldn’t guarantee our security and integrity,” he said last week.

“That’s why we’ve decided to return to the course of NATO integration.”

Ukraine joining NATO has long been described as a red line by the Kremlin, which immediately warned Mr. Poroshenko’s talk of joining NATO could worsen the conflict in eastern Ukraine.

“In my opinion this is dangerous,” said Sergey Utkin, head of the department of strategic assessment at the Moscow-based Russian Academy of Sciences.

“They are playing with a red flag in front of a bull … People in the Kremlin can use [Mr. Poroshenko’s speech] to show that the course Ukraine is taking is dangerous and they have to confront it at any cost.”

In other words, don’t expect this new Cold War to end any time soon.