December 03, 2014
BRATISLAVA, Slovakia -- Slovakia’s prime minister Tuesday said that clashes between Ukrainian government forces and pro-Russian separatists may still expand into a broader war involving other nations and that Europe should push forcefully for peace talks. 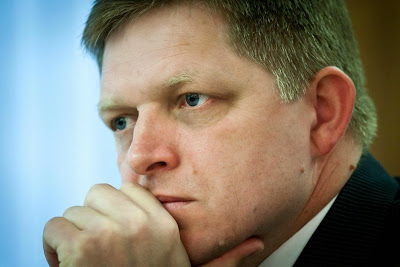 “There’s a 70% probability of a military conflict in Ukraine and not only there,” Robert Fico told an economic conference in the Slovak capital.

The government in Kiev blames Moscow for supplying weapons and intelligence to pro-Russian militants in the east of Ukraine and stoking the conflict, an allegation the Kremlin has repeatedly denied.

More than 4,300 people have been killed and some 10,000 wounded since the clashes began earlier this year.

The U.S. and the European Union have launched several rounds of economic sanctions against Russia to punish Moscow for its support of the anti-Kiev rebels in Ukraine.

“I’m not talking about a Russia-Ukraine conflict.”

The EU is currently playing a “third-class” role in seeking a peaceful solution of the conflict in eastern Ukraine, Mr. Fico said, adding that the future of Ukraine is a geopolitical issue between the U.S. and Russia.

However, all parties involved, including the EU, should strive for a peaceful settlement, he said.

“If there are any people in Europe ready to take on roles of peacemakers, then the Slovak government must also join them,” Mr. Fico said.

Any negotiations about Ukraine’s future have to leave the door open for it to join the EU after it fulfills accession criteria, he said.

But the former Soviet state should stay away from the North Atlantic Organization to prevent “needless provocations,” he added.

Russia has adamantly opposed the NATO alliance’s enlargement beyond its current borders stretching to the EU’s eastern members such as the Baltic States and Slovakia.