December 05, 2014
MOSCOW, Russia -- Striking a defiant tone, President Vladimir Putin on Thursday accused the West of provoking a crisis in Ukraine and using sanctions to try to constrain Russia. 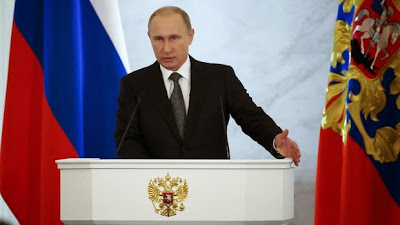 Russian President Vladimir Putin defended his country’s foreign policy in his state-of-the-nation address at the Grand Kremlin Palace on Thursday.

In his annual state of the union address, Putin defended Moscow’s annexation of Ukraine’s Crimea region in March, saying Russia would never give up the “sacred” peninsula.

He accused the U.S. and Europe of cynically using the Ukraine crisis as an excuse to pursue a long-held strategy aimed at weakening Russia.

“The policy of containment was not invented yesterday. It has been carried out against our country for many years,” he said.

“Whenever someone thinks that Russia has become too strong or independent, these tools are quickly put into use.”

Putin’s one-hour speech in the Kremlin’s ornate St. George’s Hall underscored his hard-line response to Western sanctions that, along with low oil prices, have pushed Russia’s economy toward recession.

As Putin lambasted the West, the ruble dropped 2% against the dollar.

Putin took a softer line on domestic policy, moving to allay fears of a tightening of the screws on opponents and businesses, and calling for spending cuts and economic liberalization to support growth.

At the same time, he blamed speculators for causing the ruble to plunge some 40% against the U.S. dollar this year, and offered an amnesty for repatriated capital.

U.S. Secretary of State John Kerry said Thursday that Russia must end its support for violence in eastern Ukraine and cease occupying Crimea if it wants to end its increasing international isolation.

“It isn’t our design or desire that we see a Russia isolated through its own actions,” Mr. Kerry said at an Organization for Security and Cooperation in Europe meeting in Basel, Switzerland.

The meeting came amid new efforts to salvage a Sept. 5 cease-fire between Ukrainian forces and Russia-backed separatists in the country that was in part brokered by the OSCE, which includes Russia and Ukraine as well as the U.S. Sporadic violence has continued at several hot spots, with the U.N. last month reporting nearly 1,000 fatalities in the region since then.

In Kiev on Thursday, Ukrainian President Petro Poroshenko discussed with his security chiefs plans for a “day of silence” on Tuesday, according to his office.

Earlier initiatives have quickly broken down.

A separatist official, Miroslav Rudenko, said the Donetsk People’s Republic, as the self-proclaimed government is known, was ready to observe the proposed truce.

Mr. Poroshenko also discussed with the heads of the army, security service and border guards what measures to take if the separatists don’t comply with September’s so-called Minsk agreements, his office said without elaborating.

However, he warned against acting “in a one-sided manner,” and said “attempts to show that only” Western institutions “hold a monopoly on truth…are dangerous.”

He said Russia was already doing its part to help the Ukrainian economy, but said the West and the Kiev government weren’t interested.

“At the moment they are trying with all their strength to convince us that their policy is appropriate and balanced, and that we should comply blindly and thoughtlessly,” he said.

“I don’t think that will happen until the politics inside of Russia catch up to what’s happening with the economy in Russia, which is part of the reason why we’re going to maintain that pressure,” he said.

Filling his speech with references to history and patriotism, Putin called Crimea, part of Russia until 1954, a strategic place of sacred significance for Russians, much like the Temple Mount for Jews.

“Right here is where the spiritual source of the formation of the long-lived monolith of the Russian nation and the centralized Russian state is,” he said.

As Putin was speaking, authorities in Russia’s semiautonomous republic of Chechnya were battling gunmen in the capital, Grozny.

He touched briefly on the fighting, saying he was sure police would deal with the “latest terrorist raid.”

Chechen President Ramzan Kadyrov, who earlier said he took personal charge of the operation, was in the audience for Putin’s speech.

Turning to the Russian economy, which by one government assessment could contract next year for the first time since 2009, he pledged to liberate businesses from excessive regulation.

He also called for a reduction in wasteful government spending and tighter control over the expenditures of state companies.

The president repeated calls for money held offshore to be brought back to Russia, offering an amnesty.

Putin said the ruble has been subject to a “speculative attack” and urged the central bank and the government to adopt harsh measures to prevent further weakness.

“The authorities know who the speculators are and have the tools to influence them. The time has come to use these tools,” he said.

Standard Bank analyst Timothy Ash said he didn’t see “any new big ideas in this speech which are going to help the Russian economy, or ease market pressure on Russian assets. This is old school, Cold War stuff.”