December 30, 2014
MOSCOW, Russia -- Anton Tumanov gave up his life for his country, but his country won’t say where and it won’t say how. 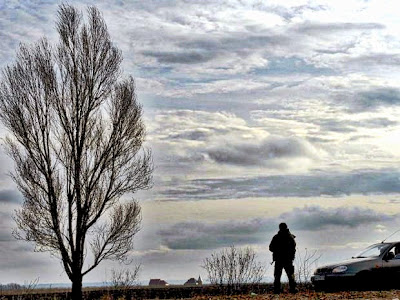 An armed supporter of the self-proclaimed People's Republic of Donetsk mans a checkpoint in the village of Olenivka near Donetsk on December 26, 2014. Ukraine and pro-Russian rebels swapped hundreds of prisoners on December 26 as part of a new push for peace in one of Europe's bloodiest conflicts in decades.

She knows that Mr. Tumanov, 20, a junior sergeant in the Russian army, was killed in eastern Ukraine, torn apart in a rocket attack on Aug 13.

Yelena Tumanova, 41, learned these bare facts about her son’s death from one of his comrades, who saw him get hit and scooped up his body.

“What I don’t understand is what he died for,” she says.

“Why couldn’t we let people in Ukraine sort things out for themselves?”

As the year draws to a close, the Kremlin continues to insist that not a single Russian soldier has entered Ukraine to join the pro-Moscow separatist militia who have been fighting government forces since April.

Earlier this month, Vladimir Putin, the president, said that all Russian combatants in Ukraine’s Donbas region were volunteer militiamen answering “a call of the heart.”

The story of Mr. Tumanov and the shadowy deaths of scores of other Russian servicemen since this summer belie that claim.

Rights activists have recorded cases of at least 40 serving soldiers suspected of dying in the conflict, and many believe the figure is in the hundreds, but prosecutors refuse to investigate their deaths.

Denied any legal status by the lies and obfuscation that muffle their stories, these men and their families have been left in limbo.

They are casualties of an undeclared war.

Officially, Mr. Tumanov died while “carrying out responsibilities of military service” at an unnamed “point of temporary deployment of military unit 27777″, part of the army’s 18th Guards Motor Rifle Brigade, whose permanent base is in Kalinovskaya, Chechnya.

His death certificate records that he died from an “explosion injury”, receiving “multiple shrapnel wounds to the lower limbs” that resulted in “acute, massive blood loss.”

The certificate leaves unticked a box saying the cause of his injuries was “military hostilities”, preferring instead “origin not established.”

Mrs. Tumanova, 41, waited “five agonizing days” for her son’s body to be brought home after she received notice of his death.

A sanitary inspector, she lives with her husband and Tumanov’s two younger brothers on the second floor of a wooden house in Kozmodemyansk, a small, crumpled town by a bend in the Volga, 400 miles east of Moscow.

The sealed zinc coffin containing her son arrived on a Wednesday.

“There was a little window in the top so you could look at his face,” she recalled.

Mrs. Tumanova spoke to a major in Chechnya by telephone who confirmed the young man had perished in Ukraine, but refused to explain why he was sent there or give any details.

The order to go there, “came from above in verbal form only”, he said.

Mr. Tumanov had served as a conscript soldier after school and he decided to return to the forces as a career soldier when he couldn’t find a job.

In June he was sent to Chechnya.

“I tried to persuade him not to go because of what was happening in Ukraine,” said Mrs. Tumanova.

“But our president said that none of our soldiers would be sent there – ’it’s just Ukrainians fighting each other’ – and I believed that. So in the end I did not argue.”

Mr. Tumanov had not been in Chechnya 10 days before he and other soldiers at the base were approached and asked if they would go to Donbas to fight as volunteers.

He and his friends refused, he told his mother by telephone.

“That was their thinking. Nobody was attacking Russia; if they had been, Anton would have been first in the queue.”

By the middle of July, things had changed.

Now 27777, his regular army unit, was dispatched to a temporary camp in the Rostov region, near the border with Ukraine, officially “for exercises.”

Soon he was telling Nastya Chernova, his fiancee, that he was going on short trips into Ukraine to accompany deliveries of arms and military vehicles to the rebels.

This was the moment when pro-Moscow militia in eastern Ukraine were on the brink of caving in to government forces, who had almost surrounded the separatist capital, Donetsk.

Over the next month, Russia would stage a major intervention, sending tanks and troops across the border to help reclaim rebel territory.

On Aug 10, Mr. Tumanov telephoned his mother and said:

“Tomorrow they are sending us to Donetsk [the rebel capital]. We’re going to help the militia.”

The next day he told her:

“We’re handing in our documents and our phones. They’ve given us two grenades and 150 rounds of ammunition each.”

Miss Chernova, a slender 17-year-old high school student, says her fiancee went against his will.

“The last time we spoke he told me he and some friends discussed running away but they were a long way from home, they didn’t have food,” she said.

Mrs. Tumanova knows what happened next from one of her son’s comrades.

The soldier gave her a handwritten description.

“On Aug 11 we were given an order to remove the identification plates from our military vehicles, change into camouflage suits and tie white rags on our arms and legs,” the soldier wrote.

“At the border we received supplies of ammunition. On the 11th and 12th we crossed on to Ukrainian territory. On Aug 13 at lunchtime our column was hit by a rocket strike, during which Anton Tumanov died.
At that moment we were in Ukraine, in Snezhnoye [a town not far from Donetsk].”

Other soldiers suggested that as many as 120 men had died when the volley of Ukrainian Grad missiles hit.

Sergei Krivenko, the head of Citizen and Army, a civil group in Moscow which helps soldiers and their families protect their rights, says activists are sure of at least 40 deaths of Russian servicemen this summer and autumn, but suspect the total may be significantly higher.

“Russia is officially not at war so there should be a criminal investigation into every death, but the authorities refuse our requests to open them,” he added.

Many relatives are too frightened to speak about their loved ones’ deaths.

Probing the deaths can be a risky business.

Lyudmila Bogatenkova, a 73-year-old representative of the Soldiers’ Mothers Committee in Stavropol, was charged with fraud after she investigated other deaths in Snezhnoye.

The St Petersburg chapter of the same group was added to Russia’s list of Foreign Agents – a blacklist of NGOs with foreign funding – after it publicized reports of scores of injured being brought to a hospital in the city.

She posts poems about Mr. Tumanov on social media and remembers the moment she woke up abruptly with a bad feeling inside on the day he died.

“Anton was not a volunteer,” she says forcefully.

“He didn’t want to go to Ukraine to fight and kill people. He didn’t have that aggression inside him. He joined up to defend his country.”

Mrs. Tumanova is still waiting for an explanation.

She asked state prosecutors via a civil-rights group to investigate her son’s last days but there has been no reply.

At the town’s military commissariat, employees said they had no information about Mr. Tumanov.

A senior official at the medical centre in Rostov where his death was recorded also refused to comment.

“For me, what’s important is that our government doesn’t hide what happened,” said Mrs. Tumanova.

“Our children are nameless, like homeless tramps. If they sent our soldiers there, let them admit it. It’s too late to bring Anton back but this is just inhuman.”

Unknown said…
“For me, what’s important is that our government doesn’t hide what happened,” said Mrs. Tumanova.

“Our children are nameless, like homeless tramps. If they sent our soldiers there, let them admit it. It’s too late to bring Anton back but this is just inhuman.”

Yes..it is "just inhuman". But when did Putin (and his oligarchs, cronies, mobsters, and KGB associates) ever concern himself with what is human? He is motivated by power and the cost in human lives and suffering be damned.

Once again, the impoverished, abused, exploited, and manipulated Russian people are foolishly and with patriotic songs on their lips dying for the "Rodina". Never mind that the Rodina is so huge that it will take centuries for them to fully develop it. It is that little stretch of land in eastern Ukraine.....that peninsula that juts out from the Ukrainian mainland that preoccupies the Kremlin's attention. They can not break their age-old addiction to going onto someone else's land and squatting there.

But what about the Russian people themselves? Surveys show that fully half of them admire Stalin - perhaps the most diabolic butcher that had ever been spawned by hell. As long as such ignorance or callousness or remorselessness exists among the people themselves, zinc coffins will be the price they pay. As long as 85% celebrate Putin's invasion of Ukraine, his inhumanity will go unnoticed.
6:40 AM