December 29, 2014
BERLIN, Germany -- German Chancellor Angela Merkel appealed to the Russian government on Sunday to use its influence on separatists in eastern Ukraine to implement a ceasefire plan agreed in Minsk in September aimed at ending the conflict. 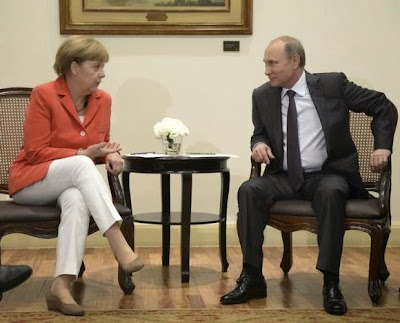 Planned talks involving Russia, Ukraine and the Organisation for Security and Cooperation in Europe to further the ceasefire arrangements have not yet taken place, "Merkel said.

A stabilization of the situation can only come if the agreed contact lines are finally implemented," said a spokeswoman in a statement.

"She appealed to the Russian government to use its influence on the separatists to this end," said the spokeswoman.

In a phone call with Ukrainian President Petro Poroshenko late on Saturday, Merkel expressed regret that the contact group talks had not happened.

Last week, Poroshenko had said the talks would take place on Dec. 24 and 26.

Merkel, who has been closely involved in diplomatic efforts to resolve the crisis, also welcomed the exchange of prisoners between the Ukrainian government and separatists.

The September truce has been flouted by both sides but violence in eastern Ukraine has decreased during December, raising hopes of further talks.

The uprising by the separatists, who oppose Kiev rule and want a union with Russia, began after Russia annexed the Black Sea peninsula of Crimea from Ukraine in March.

The pro-Western authorities in Kiev accuse Russia of orchestrating the uprising but the Kremlin denies it is behind the revolt.