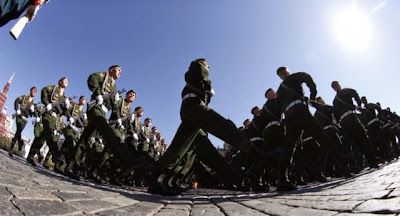 The new military doctrine says says Russia faces threats from foreign nations that "install" governments hostile to its interests in countries along its borders.

The Kremlin said in a December 26 statement that Putin had signed the updated doctrine, which says Russia faces threats from foreign nations that "install" governments hostile to its interests in countries along its borders.

The updated document also appears to address other aspects of the Ukraine crisis, including U.S. and EU sanctions against Russia.

It cites risks presented by "organizations of foreign governments and their coalitions against the Russian Federation."

Russian officials accuse the United States and the EU of helping to overthrow Ukrainian President Viktor Yanukovych earlier this year and usher in a pro-Western government in Kiev.

The revised military doctrine signed by Putin updates a 2010 version.

Both documents cite NATO expansion as a primary risk to Russian security.

Tensions between Russia and NATO, however, have risen sharply since Putin approved the 2010 military doctrine, in particular over the Ukraine crisis.

Putin has suggested that the prospect of NATO forces being deployed in Crimea was a key motivation in Russia's annexation of the peninsula from Ukraine in March.

Russia has repeatedly made clear its opposition to Ukrainian membership in NATO and demanded formal assurances that Kiev will not join the military bloc.

Ukraine's parliament last week voted to scrap the country's neutral "non-bloc" status and set a course for NATO membership, a move that Russia described as "unfriendly."

NATO spokeswoman Oana Lungescu said "any steps taken by NATO to ensure the security of its members are clearly defensive in nature, proportionate, and in compliance with international law."

"In fact, it is Russia's actions, including currently in Ukraine, which are breaking international law and undermining European security," she said on December 26.

The military alliance "will continue to seek a constructive relationship with Russia, as we have done for more than two decades.

But that is only possible with a Russia that abides by international law and principles -- including the right of nations to choose their future freely," Lungescu added.

The new military doctrine also introduced a policy stating that Russia could use precision weapons "as part of strategic deterrent measures," though it does not detail the conditions under which such deployments could occur.

The updated doctrine continues to portray Russia's military strategy as primarily defensive, stating that Russia should exhaust all efforts to settle conflicts in a nonviolent fashion before engaging in military action.

It also cites the "decreased likelihood of a large-scale war against Russia" while highlighting the risks presented by the "destabilization of circumstances" in "certain governments and regions, and the undermining of global and regional stability."

The new doctrine also expands what the Kremlin calls the "main internal risks" facing Russia to include what it portrays as a kind of information war aimed at "undermining historical, spiritual and patriotic traditions" among young Russians capable of "defending the fatherland."