December 04, 2014
MOSCOW, Russia -- President Vladimir Putin attacked the U.S. and Europe for backing Ukraine and said that Crimea, which the Kremlin annexed from Ukraine in March, has “sacred meaning” as Russia’s “Jerusalem.” 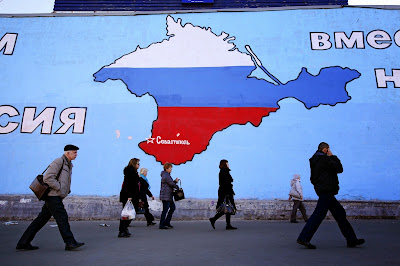 Crimea’s “territory is strategically important” and for Russia it’s “like the Temple Mount in Jerusalem” is for Muslims and Jews, Putin said in his annual address to parliament in Moscow today.

The Russian leader said he’s not surprised by the conflict in Ukraine, given what he termed “the coup and violent takeover of power” in Kiev in February.

Ukraine is battling pro-Russian separatists in a conflict in its easternmost regions that’s killed more than 4,300 people and displaced 500,000 this year.

The EU and U.S. have imposed sanctions on Russia, limiting access to capital markets for some Russian banks and companies, and blacklisting officials involved in the conflict.

“Nobody has to be frightened by sanctions, which of course are harmful -- but are harmful to everybody,” Putin said.

Russia is also being hit by falling oil prices that have dropped by more than 35 percent since June.

Russia depends on oil and gas revenue for about half of its federal budget.

The ruble has lost a third of its value since Putin started his incursion into Crimea.

Hitler, “with his humanity hating ideas was going to destroy Russia and throw us back behind the Urals,” Putin said.

“Everyone should remember how that ended.”

The Nazi leader committed suicide in his Berlin bunker as the city was captured by the Soviet Union’s Red Army in 1945.

U.S. Secretary of State John Kerry said Russia is forcing its own citizens to pay “a steep economic and human price including the price of hundreds of Russian soldiers who fight and die in a country where they had and have no right to be.”

“Regrettably, Russia continues to supply new weapons and increase support for armed separatists,” Kerry said today at a meeting of foreign ministers of the Organization for Security and Cooperation in Europe states in Basel, Switzerland.

“In doing so it fails to meet its international and OSCE obligations and to live up to an agreement that it has negotiated and signed.”

There are more than 32,000 mercenaries and Russian troops fighting in eastern Ukraine, Oleksandr Rozmaznin, General Staff representative and acting head of the personnel department of the Ukrainian Armed Forces, said today as cited by Interfax.

The government in Kiev and separatists in the Donetsk and Luhansk regions signed a cease-fire agreement Sept. 5 in the Belarusian capital, Minsk, that’s been broken almost daily.

Ukraine may hold talks next week with separatist leaders as NATO and the EU urged Russia to reverse course on the conflict raging across its border.

A new round of negotiations may involve representatives of the rebels, Ukraine, Russia and the OSCE, former Ukrainian President Leonid Kuchma said in televised remarks.

Premier Arseniy Yatsenyuk said the country faces a “tough” budget in 2015 as the government seeks to resume talks over its ailing economy with the International Monetary Fund.

It needs the money by the end of January to redeem debt, pay for heating fuel and shore up the hryvnia, which has lost 45 percent against the dollar this year.