Putin: If Russian Bear Sits Still, His Teeth, Claws Will Be Pulled Out

December 19, 2014
MOSCOW, Russia -- Russia needs to keep actively guarding its sovereignty to avoid becoming like a chained bear whose captors "will pull out his teeth and claws," President Vladimir Putin said Thursday. 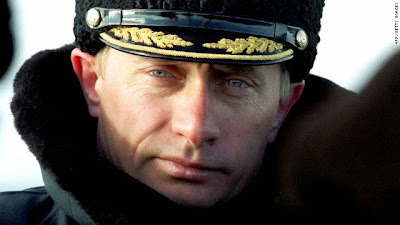 Putin: "We are not warmongers."

Responding to a question at his annual news conference about Russia's annexation of Crimea, Putin drew an analogy with what would happen if "our most recognizable symbol ... the bear who guards his Taiga (forest)" stopped chasing pigs and sat still, "maybe eating berries and honey."

The President pondered whether the bear would then be left alone before answering:

"They won't leave him alone. They are always trying to put him on a chain. They will always try to put him on a chain and as soon as he is put on this chain, they will pull out his teeth and claws. In today's terms we are speaking about our nuclear deterrence. As soon as, God forbid, this is done, the bear isn't needed anymore."

Once the bear had lost his teeth it might then be stuffed, he concluded.

Putin told reporters gathered in Moscow that his country was ready to mediate in the Ukraine crisis, and he denied that Russians killed in Ukraine were members of his country's military.

Western powers accuse Russia of sending troops and equipment to help separatists in eastern Ukraine in their fight against Ukrainian government forces.

In April, violence broke out in two Ukrainian regions that border Russia -- Donetsk and Luhansk -- as separatist leaders declared independence from the government in Kiev.

Moscow has voiced moral support for the rebels and sent aid convoys into the region, but it has repeatedly denied military involvement.

In his end-of-year news conference, Putin said there had been "a state coup and a military coup" in Ukraine with which parts of that country had not agreed.

He repeated the long-standing Russian line that any Russians killed in Ukraine were volunteers.

Putin said he hoped the situation would still be solved through dialogue rather than military means or economic blockades that were "harmful to the state of Ukraine, the people of Ukraine."

"The Ukraine crisis must be solved, and the quicker the better," he said.

A ceasefire deal was reached September 5 in Minsk, Belarus, after talks between representatives of Ukraine's government, Russia and rebel leaders in eastern Ukraine.

A subsequent agreement on September 19 in Minsk set out more measures.

But fighting in Ukraine has since resumed, with a British security official last month telling CNN that the conflict had returned to levels that preceded the ceasefire.

Ukrainian President Petro Poroshenko "is striving towards a settlement of the Minsk agreement," Putin said.

"The Ukrainian officials are not removing their troops from the Donetsk airport -- they are sitting there," Putin told reporters.

"The next step should be following up the Minsk agreement -- it is important that the Kiev authorities use all these agreements," he said.

But he also said that if Ukraine wanted to restore its territorial integrity, "it has to be open and honest."

'We're not attacking anyone'

Asked whether its economic problems were the price to pay for annexing Crimea, Putin said Russia was trying to maintain its sovereignty and independence.

He said Russia's economic woes were partially due to sanctions imposed against it.

He cited oil prices, and he praised the Bank of Russia's intervention this week to defend the ruble.

Asked to comment on suspicions in the West that he was returning Russia to a Cold War footing, Putin denied that his country was an aggressor.

"As far as our maneuvers and exercises of the military are concerned, you're saying that Russia has made a big contribution to the tensions in the world," he responded.

"Russia has only made a contribution where it is supporting its national interests. We're not attacking anyone; we're not warmongers."

Putin said Russia had stopped sending its aircraft on strategic flights in the 1990s and only resumed them in the last two or three years.

The United States, he said, has continued its strategic flights despite the end of the Cold War.

"The American bases are throughout the globe, and you want to say we are the aggressors?" he said.

"Are we extending the borders? Who is moving the borders of NATO forward -- the military infrastructure? Not us," the Russian President said.

Putin added that Russia had not been the country to establish a missile defense system.

"Who were the ones who wanted to set up this system of global security? It was not us. This is a threat for us," he said.

"In Romania and Poland -- right next to us -- and you are saying we are carrying out this policy."

He said Russia wanted to develop normal international relations and work as a partner in the areas of security and combating terror, drugs, crime and infectious diseases such as Ebola.

As Putin spoke, the Council of the European Union announced that further sanctions had been approved against Crimea and Sevastopol.

"This is to reinforce the EU's policy of not recognizing their illegal annexation by Russia and follows a conclusion by the Foreign Affairs Council of 17 November," it said in a statement.

The measures would be applied starting Saturday, the European Union said.

'We will get through this period'

In the final question of the more than three-hour conference, Putin was asked whether he took personal responsibility for Russia's economic issues and if he would stand in the 2018 presidential elections.

He replied that it was too early to make a decision on running and said the economic responsibility was "nothing I can take on alone, and I don't plan to."

Putin pointed to the "responsibility of the central bank and different government bodies for the results of the work of each department for which they have responsibility."

He ended the conference on a positive note:

"We will get through this period. It's not easy, of course, but we will strengthen our position in the world economy," he said.

"The most important thing is to ensure social prosperity of people despite the cuts in income, the budget. And we can do that, we absolutely can."