December 07, 2014
MOSCOW, Russia -- Russian President Vladimir Putin has said he hopes a permanent ceasefire will soon be agreed in Ukraine, after talks in Moscow with French counterpart Francois Hollande. 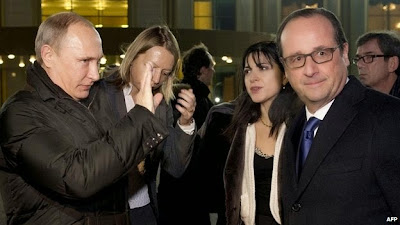 Mr Hollande is the first Western leader to visit Russia since the start of the Ukraine crisis earlier this year.

A ceasefire was signed in September but there have been constant breaches.

Russia has been angered by Western sanctions imposed for its support of pro-Moscow rebels in eastern Ukraine.

Mr Hollande made his unscheduled stop in Moscow on his way back from a visit to Kazakhstan and met Putin in the diplomatic terminal of Vnukovo airport, south-west of the capital.

Putin said they had held detailed discussions on ending the violence in Ukraine.

"It is a tragic situation. We can see that people are still getting killed," he said.

"But I hope that a final decision will be reached soon to cease fire. We have just discussed this in great detail with the French president."

Mr Hollande urged all parties to respect the truce deal, signed in Minsk, Belarus, on 5 September.

"France's role is to search for solutions and prevent problems from degenerating," he said.

"I wanted today, alongside President Putin, to send a message of de-escalation. Today that message is possible."

Putin told journalists afterwards that he and Mr Hollande had not discussed the delayed delivery of two French warships for the Russian navy.

But he said he expected France to return the money that Russia had paid so far for the vessels.

Meanwhile in the Ukrainian capital Kiev, President Petro Poroshenko said new talks were planned on Tuesday on implementing the steps agreed under the shaky ceasefire.

He said that the two sides meeting in Belarus would try to "confirm the timetable for implementing the (original) Minsk agreements".

More than 4,300 people have died and almost one million have been displaced, the UN says, since the crisis in Ukraine began in April.