One Year After Defying Putin, Ukraine Is Choking On Its Own Red Tape

December 03, 2014
KIEV, Ukraine -- Thirteen floors above a snow-covered complex on the outskirts of Kiev, in a half-built high-rise, Egor Popov wondered aloud when the warren of dusty rooms would be ready for move-in: maybe next year, probably not. 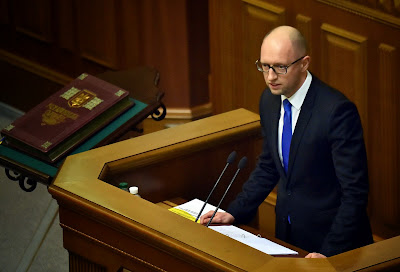 Presales on the 1,210-unit Sun Gate’s fourth wing, still a concrete-and-brick skeleton accessible only by a shaky open-air elevator, may be delayed, he said.

Not because of a lack of financing or demand for flats.

The issue is the nine layers of red tape and graft requests that are part of finishing the project, said Popov, a spokesman for TMM Real Estate Development Plc (TR61), Ukraine’s only publicly listed developer.

A year after Ukrainians rose up against the pro-Russian policies of then-President Viktor Yanukovych, business leaders still wait for an end to corruption and cronyism, promised by the revolution’s leaders.

Even as war rages in the east and the deepest recession since 2009 shows no sign of lifting, the president, premier and foreign minister said in the past week that graft is the nation’s biggest threat.

As foreign investors flee the former Soviet republic, Ukraine relies on a $17 billion loan from the International Monetary Fund to stay afloat.

The hryvnia has lost 45 percent against the dollar this year, the biggest decline among all currencies tracked by Bloomberg.

Central bank reserves are at $12.6 billion, the lowest level since March 2005.

It may get worse. IMF negotiators left Kiev on Nov. 25 without an agreement needed for disbursement of a $2.8 billion installment of the loan.

Two days later, lawmakers met one of the key concerns by agreeing on a government coalition, a month after snap parliamentary elections.

Ukraine has been in tumult since December 2013, following Yanukovych’s surprise about-face on his promise to sign a European Union trade agreement, the first step in eventual membership.

Instead, he sided with Russia, sparking mass demonstrations that choked Kiev’s city center for months and led to the deaths of more than 100 protesters.

The country was rocked further by Russia’s forced annexation of the Crimea peninsula in March and the ensuing conflict in the eastern regions of Luhansk and Donetsk.

Ukraine, the U.S. and the EU accuse Russia of financing and supporting the separatist effort with military aid.

Russia denies accusations it is fomenting the conflict, saying it is only supplying humanitarian aid to pro-Russian rebels.

Even so, business leaders and economists say the government should have done better in stamping out corruption and red tape and has been hiding its failure behind the war effort.

Business people “are frustrated by the lack of progress,” said Nicholas Burge, the head of the European Commission’s trade and economic delegation to Ukraine.

If the incoming government fails to implement changes in its first six months, “then that window will have been lost.”

“There is much more political commitment” to fight graft than a year ago, Chakrabarti said in a phone interview after the meeting.

“But it will not happen tomorrow. No country has ever managed to tackle corruption in one year.”

Ukraine ranks 144th among 177 nations in last year’s corruption-perception list by Berlin-based Transparency International, unchanged from the year before.

The World Bank’s Ease of Doing Business index shows Ukraine at 96, better than only Bosnia Herzegovina in Europe.

Investigative journalist Tetiana Chornovol, appointed in the spring to lead the anti-graft office, quit in August.

She said it was useless because there is no political will to conduct a full-scale war on corruption.

“Fighting corruption will be a priority,” said Gianni Pittella, a member of the European Parliament, in an interview last night after meeting Poroshenko and Yatsenyuk.

“It is the most important reform. IMF gives money, other partners give money, but where is the money going? We want to make sure it is going to people.”

One sign of action can be seen on the website of Ukraine’s prosecutor-general’s office, which regularly reports on arrests and seizures.

Few names are given in the announcements, mostly companies only, and progress of the cases isn’t publicly available.

The website did say that the frozen bank accounts of Serhiy Arbuzov, a Yanukovych ally who served as prime minister and fled to Moscow in February, were unexpectedly unfrozen in Nov. 21 for 24 hours by a court in Kiev.

Arbuzov is on an international wanted list and is a suspect for misappropriation of money, Svyatoslav Lahanyak, the first deputy head of the main investigation department of the Prosecutor-General’s office, said in televised remarks on Channel 5 yesterday.

He said in a statement that no money left the country during the period when the freeze was lifted.

Arbuzov’s press service didn’t pick up a call to its mobile phone and didn’t immediately answer an e-mailed request.

At TMM, the developer, Financial Director Larysa Chyvurina said some bureaucrats are “highly inventive” and manage to be “more successful than most businessmen” -- on salaries of 3,000 hryvnia a month.

This year, a state work safety inspector demanded $5,000 to sign off on the final inspection of a completed TMM site, she said.

“Authorities should finally give business, either small or large, the chance to move forward and develop,” she said.

Prime Minister Yatsenyuk told lawmakers on Nov. 26 that he has been less than successful at rooting out corruption, though he refuted the idea that his administration hasn’t tried.

“Am I satisfied with my work? Of course I’m not, because one always wants to do more and to do better,” Yatsenyuk said a day before he was re-elected to lead the cabinet.

“But have we done everything we could? I can tell you clearly, yes we have.”

“We are fully committed to undertake a reform program in the key spheres, including fighting corruption, the rule of law and decentralization. These would be the key preconditions for success of the whole reform program.”

At least, executives and analysts say, politicians are now allowing freedom of speech and are trying to reorient the country toward the EU and away from Russia.

More than 4,300 people have died in fighting between pro-Russia rebels and Ukrainian forces in the east.

“We have authorities with pro-European values and moods, and this is what people took to the streets for a year ago,” said Anna Derevyanko, the head of Kiev’s European Business Association.

The association’s third-quarter report, issued Nov. 13, found that 11 percent of Ukraine’s top managers said corruption was on the rise, versus 7 percent a year ago.

Even so, the violence has cut into business.

Kiev-based Winner Imports Ukraine, which supplies Ford, Volvo, Jaguar, Land Rover and Porsche models to car dealerships, pulled out of Crimea and the eastern provinces of Donetsk and Luhansk.

ArcelorMittal (MT) Kryvyi Rih, the Ukrainian branch of the Luxembourg-based steelmaker, spent more than 2 million hryvnia on bullet-protective vests and uniforms for 280 workers who had been drafted to fight in the east and couldn’t get equipment from the state, said Serhiy Teslyuk, the company’s deputy CEO for labor safety, in written comments.

Workers are growing increasingly unmotivated as the promises of the winter revolution fizzle, executives say.

“I’m very concerned about how to keep up employees’ spirits.”

Foreign direct investments fell to $606 million in the third quarter, less than half the level of the same period a year before.

TMM’s Popov says he’s still willing to be patient, even as his company sometimes has to go to multiple offices for the same approvals.

The new open environment helps offset that, he said.

In the past, companies were afraid to brag about successes in press releases because they feared potential raiders with links to the state, he said.

“For businessmen, it was a huge step forward, in the sense that we can speak freely and not be afraid to do so,” he said.