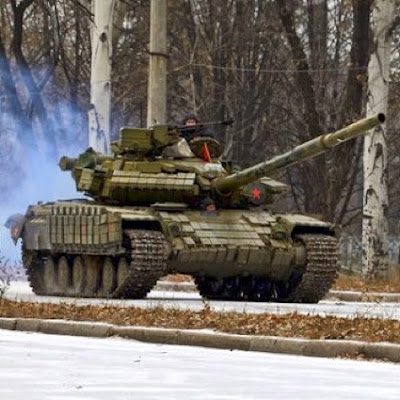 This Russian T-72 tank was seen in a rebel-held area near Donetsk airport.

He denied an earlier report that the terminal had been blown up.

The airport, just outside the city, has been battered by shelling for months.

"It makes no sense to blow up the [old] terminal - it is one of the defensive structures for our troops," Mr Lysenko said.

There has been no confirmation of the fighting from the rebel side.

Mr Lysenko said the Ukrainian troops had inflicted "serious losses" on the rebels and were still controlling both the old and new terminals.

They had come under heavy artillery, mortar and rocket fire, he said.

The rebels had been mounting attacks for three days running with the help of Russian special forces, officials said citing information from the field.

The Kremlin has repeatedly denied Ukrainian and Western accusations that Russia has sent tanks and troops to the region to help the separatists.

NATO Secretary General Jens Stoltenberg said on Monday that there had been "large transfers of Russian advanced weapons, equipment and military personnel".

A ceasefire in eastern Ukraine was agreed in September, but there have been many violations and tensions escalated when the separatists held elections condemned by Ukraine as illegal.

The Russian military has announced that it will hold large-scale exercises involving "tens of thousands" of servicemen in the Central Russia military district next autumn.

New weapons will be tested at the time, the statement said.

NATO has condemned Russia's involvement in Ukraine and on Tuesday the Western alliance will discuss plans for a "high readiness force" which could be deployed rapidly to Eastern Europe.

The rebels seized official buildings in the east in April, soon after Russia's annexation of the Crimean peninsula.

The rebels and Moscow accuse the pro-Western leaders in Kiev of having ousted former President Viktor Yanukovych illegally, and of threatening the rights of Russian-speakers.

The rebels control much of the Donetsk and Luhansk regions.

They accuse Ukraine of shelling residential areas of Donetsk indiscriminately from positions in and around the airport.