Looking For Truth In Ukraine 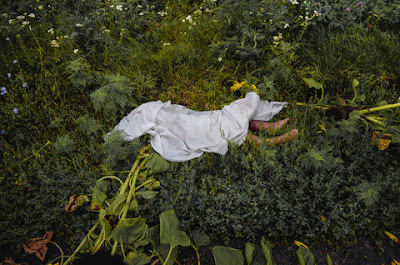 The body of a child, a victim of Malaysia Airlines Flight 17, found one mile away from the crash site in eastern Ukraine. July 18, 2014.

The protesters were idealistic, she said, but no match for the government forces that brutally repressed them.

Three years later, when Ms. Turchenkova arrived in Kiev as the Maidan revolution was just beginning, she sensed that these demonstrations would head in a different direction.

“It was very, very impressive to see how quickly they formed self-defense militia groups,” said Ms. Turchenkova, 27, who is based in Moscow.

“And this excitement was mixed with an anxious feeling and suspicion about what might happen.”

She photographed students, workers, Cossacks and more radical nationalist groups, many of which, she said, had older people training others in self-defense and physical fitness.

Though she had only been photographing for two years — and never on assignment — Ms. Turchenkova got unusual access to all sides as she took some telling images.

She has gone from an amateur fumbling with her camera as she photographed Russian police squashing demonstrations in Moscow to making compelling photos in eastern Ukraine.

Ms. Turchenkova got her first assignment — from Le Monde — to cover the controversial secession referendum in Crimea, where most Russian-speaking residents welcomed Russian military forces.

After the vote, which was not recognized by the United States or most European countries, she headed to eastern Ukraine, where self-defense forces clashed with pro-Russian militias that had seized government buildings.

“There were young guys joining Ukrainian self-defense groups with the idea of defending their motherland,” she said in a telephone interview.

“And from the other side very, very anti-Kiev, local pro-Russians supported with military vehicles and fighters from across the border defending their motherland.”

She photographed as the takeovers and pro-Russian rallies were greeted with great excitement by residents who supported the rebels.

But as fighting erupted, and many residents fled, those who remained soon found themselves without jobs, pension payments, or even food.

Ms. Turchenkova lived among them during the conflict for most of the following nine months.

“Now there is a silent desperate mood, and people don’t really care who is running the region,” Ms. Turchenkova said.

“They only care that winter is coming and they want to have at least heat and some money to buy some food. It’s very hard to imagine that in the 21st century in Europe that you meet people living in the basements with their children for two to three months.”

On the outskirts of Donetsk, and in Luhansk, where the fighting has been fierce, residents are afraid to leave their basements.

What food there is comes from humanitarian organizations.

Though a cease-fire was declared in September, fighting continued.

Ms. Turchenkova was able to cover both sides of the conflict in eastern Ukraine, but it was difficult for her to identify Russian soldiers in the area.

At times, she saw them on the road, but in unmarked military vehicles she could not approach.

They would quickly mix in with the rebels, until last month when large numbers of Russian troops crossed the border with over 100 military vehicles.

“This time they were clearly identifiable and didn’t bother covering up,” she said.

“For the first time you could see that they were Russian troops.”

Though Ms. Turchenkova is back home in Moscow for a few weeks, she plans to return to Donetsk this month.

Unfortunately, her original instincts when she arrived in Kiev turned out to be right:

The euphoria of the Maidan protests were followed by much darker times.

The revolution in Kiev has turned into a protracted contest between the military might of Russia and diplomatic and economic responses of Europe and the United States.

And Ms. Turchenkova is determined to follow the consequences wherever they may lead.

“There is a war on my country’s border and because of the propaganda war it is difficult to make sense of what is going on and differentiate what is real and what is fake. That’s why it is important for me to just be in the place and see what is going on.”