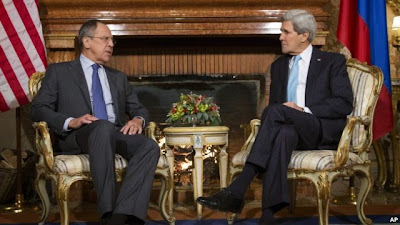 The two diplomats met for several hours in Rome.

No details of their talks have been released.

But a State Department official says Kerry repeated the importance of the September cease-fire and de-escalating the situation on the ground.

The truce has been consistently broken almost from the moment it was signed.

Russia has reacted angrily to U.S. congressional approval Friday of a bill to send up to $350 million in military aid, including possibly lethal aid, to Ukrainian forces fighting Russian-backed separatists in eastern Ukraine.

The legislation, known as “Ukraine Freedom Support Act of 2014,” also calls for expanded sanctions against Russia for its role in the conflict in Ukraine.

President Obama, who wants to avoid getting drawn into a war between Russia and Ukraine, has yet to sign the measure.

The U.S. State Department says there are no plans to send weapons to Ukraine.

It has said the aid would be limited to such non-lethal military equipment as body armor and communications equipment.

Kerry and Lavrov also talked about tensions between Israel and the Palestinians, including proposals at the United Nations for Palestinian statehood.

Russia's official Tass news agency said Lavrov spoke of the importance of taking urgent steps to keep the situation in the Middle East from deteriorating even further.