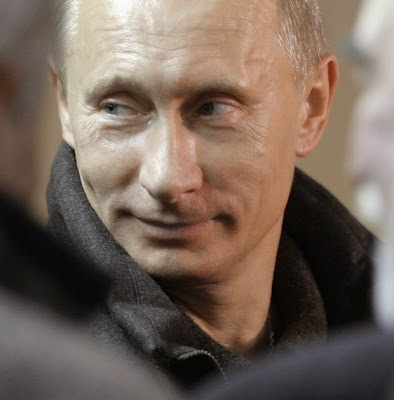 The real problem is that smiling Putin has the whole region cornered. And no one seems to notice.

But he laughs when I ask whether he’d like to live in Russia; he clearly has no longing to set down roots in the Motherland.

And he admits that he’s unsure what to believe about Russia’s activities in Ukraine.

“Who’s telling the truth?” he asks.

“Moscow or the West?”

I befriended Sergei on a visit to Estonia last spring and we’ve met there three times since.

He’s a broken-English-speaking political junkie, entrepreneur, driver, and gadget hobbyist (he has loads of devices and when my iPhone is troubled, he’s the counselor).

He encapsulates the ambivalence that Russian President Vladimir Putin likes to exploit in the country’s Russian ethnic minority.

And some of the Kremlin’s manipulation is shameless.

Sergei tells me he and his friends were surprised to see a recent Russian political talk show with what he claims were good looking, silver-tongued actors and actresses playing the role of pundits.

In fact, the bag of tricks Putin uses to twist, turn, manipulate and suck countries in Eastern Europe back into the Russian orbit is wide-ranging.

There’s brute force, of course, but Ukraine is not a one-off.

We seem to forget that Putin invaded Georgia a half dozen years ago and, like Crimea, annexed the country’s provinces of Abkhazia and South Ossetia.

In a number of countries—including much of central and Eastern Europe, which depend on Russian natural gas for heating and electricity—the aggression does not include uniformed soldiers and tanks but comes in the form of trade and energy used as weapons.

Of course, Russia needs the region, too, and not just to satisfy its geo-political cravings.

For Russia, the oil and gas sectors account for more than half of the country’s economy and state budget.

Although today’s tensions often seem less overt or presumably threatening than conventional warfare, the combination of energy, trade ties and other factors are making key parts of the NATO alliance a mess.

At a recent celebration here in Prague intended to mark the 25th anniversary of the Velvet Revolution, crowds pelted Czech President Milos Zeman with eggs and tomatoes, shouting “shame, shame.”

Some carried banners saying, “We don’t want to be a Russian colony.”

Zeman opposes the sanctions imposed by the West against Russia for its actions in Ukraine and minimizes the role of Russia in the country.

He also calls the conflict a civil war.

The same appeasement is exhibited by Slovakia’s Prime Minister Robert Fico—also a vehement critic of sanctions.

Fico is harder on Kiev than Moscow in his public statements, calling the Western sanctions “meaningless and counterproductive.”

Another NATO member, Hungary, has become a thorn in the side of the EU and the United States for a variety of reasons in recent years.

In the latest row with the European Union, the Hungarian parliament approved this month a law that paves the way for construction of the Russian-backed South Stream gas pipeline.

The United States and the EU pressured Bulgaria this summer to quit the project, which Russia wants because it ends Gazprom’s dependence on Ukraine’s gas-transit system.

But this did not deter Hungarian Prime Minister Viktor Orban, who has followed his own accommodationist line toward Russia over Ukraine and even declared this summer that Putin’s Russia was a model of a successful country.

“Orban once looked like an Atlanticist in the 1990s,” a former senior Czech official told me this summer, “but he’s turned out to be a populist, nationalist and opportunist who likes playing the Russia card.”

Budapest did Moscow a small but important favor recently by closing its Embassy in Tallinn.

Budapest says the decision was aimed at cutting costs.

These are not isolated incidents, which becomes clear once you begin to connect the dots.

No, today’s Russia is not the Soviet Union anymore, but Moscow is carving up Europe again.

Putin has a vision and he’s executing it with very little resistance.

In the process, he is undermining the cohesion and credibility of the Western alliance.

Russia has made clear that a path toward Europe and the EU is not in the cards for Moldovans without possible and dire consequences.

This fall, Russian Foreign Minister Sergei Lavrov warned Balkan countries that joining NATO would be seen in Moscow as a “provocation.”

The vision of “Europe, whole and free” is vanishing before our very eyes, and the idea that free nations choose freely their memberships and alliances is being decimated by a Russia on the move again.

In the north, tiny Estonia emerged as a wunderkind of the region. Estonians have developed a well-functioning market economy, stable democracy and a vibrant, competitive sector for innovation and technology.

The entire country is wired for WiFi, including forests, parks and beaches.

Estonia, a country of 1.3 million, has been feeling Moscow’s pressure for years.

The year before Putin rolled tanks into Georgia, Estonia was cyber-attacked by Russian proxies.

Parliament, banks, and broadcasters were thrown into disarray.

“You can easily say that it has reached unprecedented levels,” a senior Lithuanian diplomat tells me.

He figures that two-thirds of Russian embassy personnel in Vilnius, Riga and Tallinn are spies.

All the while, Putin keeps pushing boundaries, literally.

In September in Tallinn, President Obama delivered a strong speech, pledging to defend the Baltic States against any possible aggression from Moscow.

The kidnapped Estonian remains in a Russian prison.

If the East German Stasi had kidnapped a West German from West German soil during the Cold War, there would have been an uproar in Washington and NATO capitols.

Today such law-breaking barely gets noticed.

NATO has Article 5 to trigger a collective defense against an invasion, but what if Russia keeps whittling away that cohesion by a mix of traditional and nonconventional warfare?

The threat is pressing westward, too.

In October, a Russian submarine trolling the shores of Stockholm startled Swedes.

In Finland, where now 60 percent of the population say they view Russia as a threat, senior officials have complained about an increasing number of violations of Finnish airspace.

Quite possibly—but not necessarily for the better from the West’s perspective.

After a recent visit to Helsinki, the Russian parliament’s foreign affairs committee chairman Alexei Pushkov was happy to report to fellow lawmakers that Finland is ready to give up on sanctions against Russia over its aggression in Ukraine.

There is an unmistakable pattern: Putin keeps telling us how he sees Europe and signals what he’s inclined to do; we fail to listen; and he proceeds.

Two years earlier he had promised that Russian “peacekeepers” would stay in Abkhazia and South Ossetia.

The year before that he denied that Estonia had ever been occupied by the Soviet Union.

Today, Putin defends Molotov-Ribbentrop, the pact between Nazi Germany and Stalin’s Soviet Union whose secret protocols provided for the divvying up of Finland, Estonia, Lithuania, Latvia, Romania and Poland into spheres of influence.

Where does all this end?

It’s critical that we recognize that this is not just about Ukraine.

Andrei Illarionov, a former senior economic adviser to Putin, actually thinks that Putin’s ultimate goal may be to take control of territories Russia ruled before 1917, including Finland, the Baltic States and part of Poland.

This may sound like a ridiculous fantasy, but who knows?

Until the West—with American leadership—starts to rally and push back there can be little doubt that Putin will keep pushing forward.