December 27, 2014
DONETSK, Ukraine -- Ukraine is suspending all train and bus services to Crimea due to a "deteriorating" security situation on the Black Sea peninsula which was annexed by Russia in March, Ukrainian transport chiefs said on Friday. 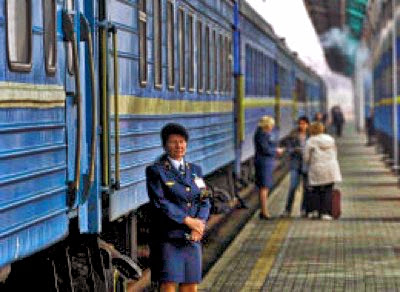 A Ukrainian railways employee stands in front of a train departing from Donetsk to Sevastopol, Crimea at Donetsk's railway station, eastern Ukraine.

Although controlled by Moscow, Crimea's only land link is with Ukraine and it has remained dependent on the Ukrainian mainland for most of its supplies, including much of its electricity and water.

The suspension of bus and train links effectively creates a Ukrainian transport blockade to and from the region, as Ukraine has already banned sea and air traffic with the territory, which is still serviced by Russian airlines.

However, other road transport including passenger cars and lorries will still be allowed to travel into and out of Crimea.

Russia's takeover of Crimea - an annexation which Kiev does not recognize - pushed relations between Moscow and the West to their lowest point since the Cold War, and a month later an uprising by pro-Russian separatists began in eastern Ukraine.

The decision to suspend bus routes to Crimea from Friday was taken to protect passengers, Ukraine's state land-transport security inspectorate said in a statement.

It was made "due to the deteriorating situation in the Autonomous Republic of Crimea, the invasion on to Ukrainian territory of armed groups and extremists, military aggression from Russia, and to protect the lives and health of passengers," it said.

Violence arising from Kiev's conflict with pro-Russian separatists has been confined almost exclusively to eastern regions of Ukraine, and has not affected Crimea.

But the Ukrainian government has repeatedly warned of a build-up of Russian forces on the peninsula.

State rail firm Ukrzaliznytsia said cargo trains would be suspended from Friday, while passenger routes would gradually cease running over the weekend and on Monday.

"In order to ensure the safety of passengers ... (the railway) will cut the route of trains to Crimea off at Novooleksiyvka and Kherson," it said in a statement, referring to two towns on the Ukrainian mainland near Crimea.

The transport authorities did not say how long the bus and train suspensions would last.

Mired in a power crisis, Ukraine has also had to ration electricity to all regions, including Crimea.

On Friday the energy ministry temporarily cut off power supplies to Crimea for the second time in a week because the peninsula had failed to curb consumption as required.

Supplies resumed later in the day.